“Throughout history—and even today—the head honchos usually like things the way they are. Rocking the boat does not make them happy—not one bit. They may even want your head for going against the grain. But that threat didn’t stop the characters spotlighted in ‘Fantastic Fugitives’ from changing history. They founded countries, won wars, and even ended empires—all while on the run! History’s Most Wanted covered in this book include: Spartacus, Martin Luther, Harriet Tubman, John Dillinger, Emmeline Pankhurst, Nelson Mandela, and six more!” [back cover]

Review
“I’m going to change the world!” I wonder how many of these Fantastic Fugitives actually had this goal in mind. Probably not many, if any at all. These people were too busy getting things done to stop and think about lofty goals such as changing the world. In fact, some of these fugitives have low morals; it seems impossible for them to even care about the world, much less change it. But they did. Reading how is both fascinating and entertaining.

Take John Dillinger as an example. Dillinger raided police stations, stealing their weapons and then robbing banks using those same guns. He was notorious, dangerous, and a public menace. So how did John Dillinger, Public Enemy No. 1, change the world? For starters, police saw a big upgrade in equipment and training: faster cars, bulletproof vests and cars, and two-way radios. Cities opened local police departments; congress passed tougher laws, and created the FBI. Banks took security seriously, hiring armed guards, installing security systems, and improving front counters (mainly making them taller so men like Dillinger could no longer climb over). All of this in response to John Dillinger. 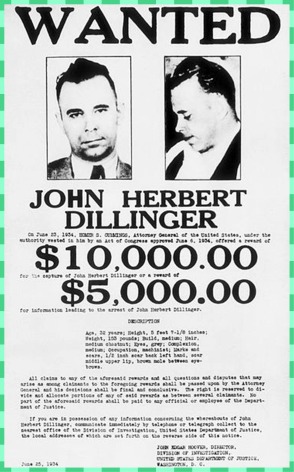 Virginia Hall accidentally shot her knee causing the doctors to amputate her lower leg and the US State Department to change their hiring policy to a strict no amputee policy. So Hall went to Europe, became a WWII British spy—her contributions had a direct bearing on the Allies win—then returned to the US to join the CIA, paving the way for women to become more than secretaries in that agency. Another woman, Emmeline Pankhurst successfully used hunger strikes to change life in Britain for women, including their right to vote.

Emmeline Pankhurst dealing with British police at a suffragist rally.

Fantastic Fugitives contains an even dozen of these world-changers. Each with his or her own chapter including talking points, definitions, and images. Need to know something fast? Check out the index, the list of sources, or notes on those sources (divided by chapter). Beginning with the Introduction, DuMont’s writing style is casual and conversational. The often-pedestrian use of clichés and current slang diminishes overall quality. For example,

Crixus and Spartacus are described as “BFFs.”
Spartacus decides to change course: “Say what?”
“In between potty breaks . . . (Martin) Luther found time to create a religion . . .”
Mandela decides to avoid capture. “Duh.”
“(Typhoid) Mary didn’t seem to notice that every family she worked for came down with raging fevers after eating her finger-licking good peaches and cream special. (Or did she?)”

“Or did she?” Really? No, she did not. The author does clarify this, but why write this in the first place? Breaking the fourth wall can work well in fiction, but this conversational style just does not work in Fantastic Fugitives. At times, these too familiar statements feel like a dumbing down. Kids, and teachers, will figure this out. Fantastic Fugitives could be useful in the classroom, if the writing did not annoy the adult teacher, and I believe it will. Since this is history, it would have been nice to see the actual dates, when dates are known, rather than the generic (example) “Nineteenth to twentieth centuries CE, America” (Harriet Tubman). 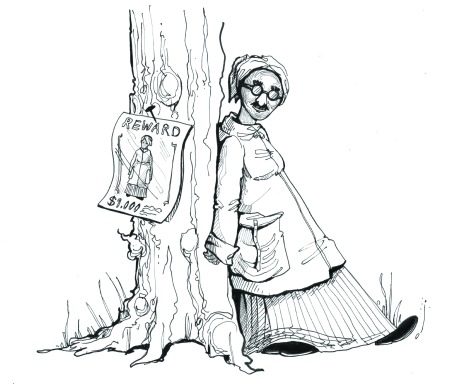 A disguised Harriet Tubman by her “wanted” poster.

Fantastic Fugitives does intrigue me with its interesting people and the unexpected information about their lives. Kids will be equally intrigued, especially those who enjoy history. Fantastic Fugitives may well be a great starting point for further classroom study. For many of these fugitives, the world changed to handle them, or to prevent others from repeating history. Others directly changed history by their actions. All of these Fantastic Fugitives had in one thing in common; they took risks most of us never would. Once past the conversational writing style, Fantastic Fugitives will have you wondering what more these historical figures have to tell us. The research is top notch and deserves our attention.
.
FANTASTIC FUGITIVES: CRIMINALS, CUTTHROATS, AND REBELS WHO CHANGED HISTORY (WHILE ON THE RUN!) Text copyright © 2015 by Brianna DuMont. Reproduced by permission of the publisher, Sky Pony Press New York, NY.

Full Disclosure: Fantastic Fugitives: Criminals, Cutthroats, ad Rebels Who Changed History (While on the Run!) by Brianna DuMont, and received from Sky Pony Press, (an imprint of Skyhorse Publishing), is in exchange NOT for a positive review, but for an HONEST review. The opinions expressed are my own and no one else’s. I am disclosing this in accordance with the Federal Trade Commission’s 16 CFR, Part 255: “Guides Concerning the Use of Endorsements and Testimonials in Advertising.”