One big change in this series is the illustrator. New with Book 3 is artist and animator Michael Bermundo. The Pen Pieyu Adventures are published by Tate Publishing. Snarls’ Book Blog Tour is sponsored by Sue Morris from Kid Lit Reviews—ME! I keep thinking I am missing something (or someone). Something or one really important to the series. Oh, yes, All of the fabulous children’s book reviewers. Thank you all for participating in Snarls’ tour. Banner created by C. L. Murphy. Thank you!

Okay, now that’s settled. Wait . . . did I still miss someone? Who? Oh, the author. I forgot about the author? I thought Snarls was the author (it is his tour). He’s not? In that case, the most important person in Sir Princess Petra’s life, the author, is Diane Mae Robinson. How could I ever forget.

“Sir Princess Petra has already attained her knighthood in the Kingdom of Pen Pieyu and her non-princess-like talent certificate from Talent School, neither of which pleases her father and mother, the king and queen.

“The king writes up more silly rules in the royal rule book to deter Sir Princess Petra from her knightly ways and useless talent, and turn her into a real princess once and for all.

“Will the king finally succeed with this newly written, ridiculous mission for Petra?” [back cover]

Review
Sir Princess Petra and friends return for the third  of four installments of The Pen Pieyu Adventures. King Longstride continues add new, oddly worded rules to the “Royal Rule Book” trying to strip Sir Princess Petra of her knighthood. The King is so determined to keep Petra a princess he willing sends Petra to the Land of the Boogy Gobees, alone. Wait, did he say alone? ALONE! No Snarls? No Sir Bograt? No one by Petra’s side?

Then King decreed, (should Petra actually fail her mission), 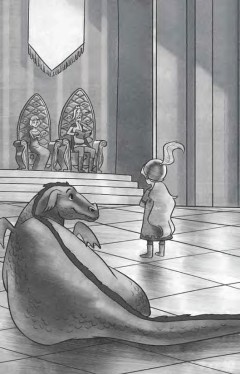 “Hence if the hereby-stated should fail this royal seal-of-approval mission, which is of the utmost importance to the well-being of the kingdom shareholders—meaning me and the queen—the hereby-said Princess Knight will henceforth be required to relinquishment of the hereby-noted knighthood to the full completeness so as to render it null and never was.”

Could this get worse? Yep, if Petra has only 2 days to complete the mission and, should she “fail, forfeit, or give up” Sir Bograt, the bog witch, will lose her knighthood as well. Petra’s solo mission is to capture a “car-panther”—vicious scoundrels with saw-blade teeth reinforced with iron tips—and bring it back to Pen Pieyu Kingdom. (What will King Longstride do with such a dangerous animal?) Petra calls the King’s bluff and sets off on her mission. She travels deep into the forest, through the swamps surrounding Kingdom Mesoggie, and finally arrives at the Land of the Boogy Gobees.

As Petra enters the Land of the Boogy Gobees, her steed suddenly disappears. (Did I forget to mention how Petra—once again—outsmarts her father? Well, she did. Snarls and Sir Bograt are by Petra’s side. Wait, you should know, Bograt was lost at Hobble-Wobble Creek, swept away on a rogue wave and disappearing down the creek). Now alone, as her father wished, Petra must complete the mission. 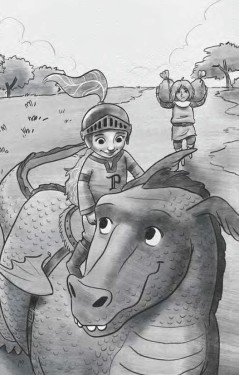 Sir Princess Petra’s Mission may be the best installment of The Pen Pieyu Adventures. Robinson increased the number of unexpected twists, making them stranger and funnier. As is the norm in Kingdom Pen Pieyu, you will meet several characters, each one delightfully stranger than the last. Snarls, the dragon, has always been my favorite character. (Snarls, my friend, after three stories, you are looking perfectly plump.)

I love the word play, common in this series, and the goofy King and Queen. Petra is a great role model and a non-stereotypical character for girls. She wants her parents to accept her, as she is—a princess and a knight. Petra is respectful and considerate, has great self-esteem, and understands the King’s Royal Rule Book better than the King. Though The Pen Pieyu Adventures is a terrific series for girls, boys will find much to love as well, including characters such as Snarls the dragon (Petra’s Steed).

Sir Princess Petra’s Mission will keep reluctant readers entertained with its short chapters, broken up with interesting grayscale illustrations. At 105 pages, this is a fast read, though reluctant readers could easily finish one or two chapters a sitting, if not more. Bermundo’s illustrations enhance the story and bring the characters to life. Sir Princess Petra’s Mission is his debut children’s book. Michael Bermundo is also a student at, and will soon graduate from, University of Cebu with a degree in animation.

NEXT UP FOR MS. ROBINSON
Grammar for Kids and Dragons, an easy-to-understand grammar book for middle-grade children (dragons and adults too), will have all of the Pen Pieyu characters explaining the grammar lessons making this an easy and fun read, forthcoming 2016.

.
Full Disclosure: Sir Princess Petra’s Mission (The Pen Pieyu Adventures, Book 3) by Diane Mae Robinson & Michael Bermundo, and received from Tate Publishing, is in exchange NOT for a positive review, but for an HONEST review. The opinions expressed are my own and no one else’s. I am disclosing this in accordance with the Federal Trade Commission’s 16 CFR, Part 255: “Guides Concerning the Use of Endorsements and Testimonials in Advertising.”