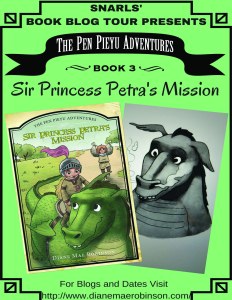 In Book 1, Princess Petra wants to become a knight. Her parents are against it, so King Longstride writes new rules in the Kingdom’s Royal Ryle book designed to trip Princess Petra up, causing her to fail. She doesn’t. Soon, Princess Petra is known far and wide as Sir Princess Petra, the only knight in the Kingdom of Pen Pieyu. Her one test involved taming the ferocious and widely feared, dragon. Petra tamed the loud dragon, making him her steed. That dragon was Snarls. 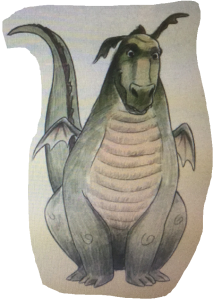 Hello Snarls. I hope you are fine this good day.

Yes, Hello Petra. It’s good to see you, too. The questions are for Snarls this time . If you recall, you were interviewed here a couple years ago and just recently at the Insatiable Reader. You are welcome to sit in, but please, let Snarls answer the questions.

So, Snarls, you are a real, live, fire-breathing dragon, not a horse, yet Sir Princess Petra rides you as if you were a horse. She calls you her “steed.” What is it like for a dragon to be a steed?

“Uhhhumm. Yeah, about that. First things first. I have something to clear up about this steed business. My author girl would have you believe, by her writings in book two, that my pink tassel saddle was all Petra’s idea. NOT SO! I picked out the saddle myself. It’s my way of saying I am a modern dragon. Sort of like the “man purse” thing in your world.

“Secondly, Petra would have you believe I had no choice in the matter of becoming a steed. NOT SO! It was totally my idea from the beginning.” 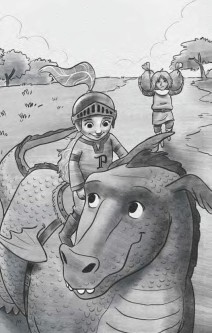 “Oh, what was the question? Oh, never mind that . . . Since it was totally my idea to become the one, and only, and first ever, dragon steed . . . YES!I love my job. It was all my idea. I mentioned that, right?”

Readers know you are a fantastic cook. When not working as Petra’s steed, or as the chef-extraordinaire of the Kingdom of Pen Pieyu, what do you do to relax?

“I really like being near food, so I’m always happy to do more cooking and barbequing—I am the royal chef at the castle too. On my days off from cooking and steeding, I really enjoy rolling around in the mud. Mud is goopy and silky smooth. And it does wonders for scaly scales. But I have to be careful to clean off all the mud between my toes so Petra doesn’t find any. Petra either doesn’t like muddy toes or she thinks I like her picking mud out of my toes. And just for the record, I am fine with MANLY muddy toes.” 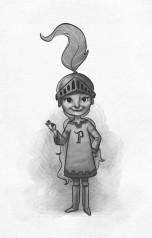 Petra? Did you want to say something?

Yes, you are. Now, Snarls, Onions. King Longstride demands all knight-wannabes empty the onion room—by eating the onions—before deemed fit for knighthood. What is so darn important about onions?

“Well, as you all know, King Longstride is a little bit of a scatter brain and his rules in the royal rule book don’t always make sense. He did, although, make up that rule just weeks before Petra decided she wanted to become a knight.

“I was saying Petra hates onions. Strange, don’t you think?”

Strange, indeed. I don’t know why anyone would HATE a harmless vegetable, such as an onion. Onions are pretty good in most dishes. Dishes. How many plates did Petra hide onions under when she supposedly ate all those onions?

Never mind. I’m sure your “writer girl” took some literary license with that scene.

“No literary licenses, but she has the Lieutenant Governor of Alberta Emerging Artist Award in   Literary Arts (2112) for Sir Princess Petra.” 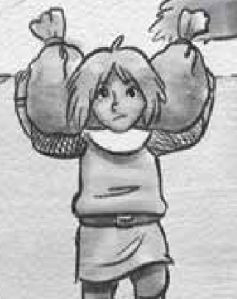 —off on a wild CREEK-wave. Snarls, you were there. What happened? What caused this freaky wave?

“Ewwwww. Hobble Wobble Creek is a scary place. Rumor has it that sheep have lost ears, cow have lost tails, and the odd peasant has lost a toe or two there—you know, the kind of place a bog witch could go missing in.

Oh, just that someone or something plopped in the riv, er creek, causing a huge cannonball-like wave, taking Sir Bograt riding a giant wave down the course of Hooble-Wooble River.

“ Are you blaming me for something?”

What was that? [Oh, really? Okay.] It seems Petra has decided to wait for you outside.

“It’s raining. I should take her an umbrella.”

On this last mission, Sir Petra, Sir (now missing) Bograt, and you are to capture a notoriously feared and possibly nonexistent car-panther, bringing it back to King Longstride. We know when not a steed, you can be found in the castle kitchen, just off the royal court, where the king and queen do whatever kings and queens do when sitting on a throne. Voices carry.

“I did overhear something, but it didn’t make sense.” 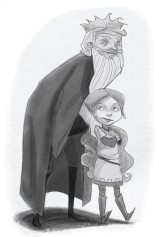 Did you hear what the King wants with a fear inducing car-panther?

“I heard the king and queen whispering about the usefulness of car-panthers and how the kingdom should acquire one to CLEAN UP the castle before the next shingding. Then Bograt blabbed about the notorious dragon-eating car-panthers. Well! You can see where I’m coming from when I thought the whole thing was to get rid of me.

“My favorite person, next to Petra of course, would have to be Duce Craplips. He wears pink armour and he crochets—he’s such a modern-day type prince. I don’t really care for blabber-mouth Bograt, or smarty-pants Norton Nastybun.” 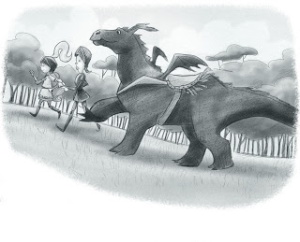 “Quick question two? Hurry, this is supposed to be quick!”

“The swamp lands we went through in book three were pretty nasty. As you know, I had a misfortunate event there.” 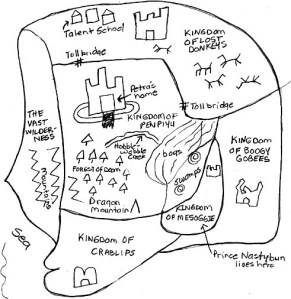 Yes, I know. At the Creek Hobbled Wobble.

“Geez. Hobble-Wobble Creek. And NO!

“It all had to do with Norton Smarty-Pants Nastybun!  He had his puny army stick me with arrows, in my butt! Totally humiliating!!!!!  It was just a totally uncalled for scene.”

“Falling rocks, being chased, indigestion. You know, the usual stuff.”

Snarls, thank you for stopping by. It is always a pleasure. If she’s out there, say goodbye to Petra for me. 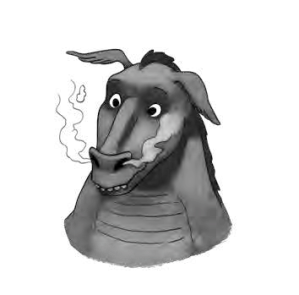