“Bear didn’t mean to break a little girl’s kite, but she’s upset anyway—upset enough to shout “HORRIBLE BEAR!” Bear is indignant. He doesn’t think he’s horrible! Then Bear gets a truly Horrible Bear idea. What will he do next? As Bear prepares to live up to his formerly undeserved reputation, the girl makes a mistake of her own, and realizes that maybe—just maybe—Bear isn’t as horrible as she had thought.” [press release]

Review
A little girl flies her yellow and white geometric kite. Higher and higher it flies, near a mountain. The one with a cave. In fact, the kite flies right into the cave. Imagine that! The girl traipses up the mountain to retrieve her kite. Looking in, the little girl sees her kite. It landed on the sleeping bear’s belly. Quietly entering the cave, the little girl reaches for her kite . . . just as the bear rolls onto his side, crushing the kite.

The peacefully sleeping bear, hugging a small stuffed bear, suddenly awakes. He hears the girl’s ‘horrible bear’. How could he not, she shouted it all the way down the hill. Bear becomes indignant.

Bear gets an idea. He practices waking someone up and then he marches down the mountain and through the little girl’s backyard, ignoring the clothes line now snagged on his clothes, right up to her door. Roaring all the way to the door, Bear is ready . . . but then the door flies open. There stands the little girl with tears in her eyes.

What? What happened to the “HORRIBLE BEAR” who ruined her kite? Why did she change her mind? Did Bear follow through on his idea?

Dyckman and OHora created a picture book about hurt feelings, sudden reactions, misplaced anger, and retaliation. The little girl, with a head of wild red hair, goes home angry, stomps into the house, and kicks innocent inanimate objects. In her room, something happens. It causes a sudden understanding and little girl sees the day’s events more objectively. She simply says, “Oh.”

Without one word of moralizing, Horrible Bear shows how easy it is to become angry with another, justified or not. The bright and humorous acrylic illustrations add small facial changes to show each character’s emotional changes. The little girl scowled in anger—a face similar to Bear’s angry expression—she looks surprised when she realizes her mistake, followed by a teary apology. Bear reacts as many kids do when falsely accused of something:  he becomes angry and vengeful. Tit-for-tat. 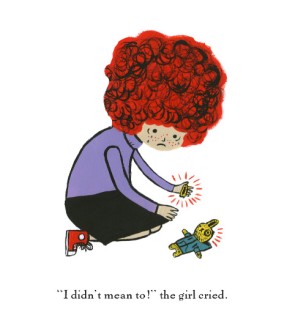 Parents will recognize the quick (incorrect), judgements in Horrible Bear. A bystander trying to enjoy a picnic gives readers the final twist (and a possible lead into a sequel?). Don’t miss the little detail changes, such as the expressions of a stuffed bunny. Horrible Bear tackles a common problem with humor and heart, entertaining readers along the way. Young children will enjoy Horrible Bear, a wonderful story hour selection. The team of Dyckman and OHora (Wolfie the Bunny

) has teamed up for another winner.

Full Disclosure: Horrible Bear by Ame Dyckman & Zachariah OHora, and received from Little, Brown Books for Young Readers, (an imprint of Hachette Book Group), is in exchange NOT for a positive review, but for an HONEST review. The opinions expressed are my own and no one else’s. I am disclosing this in accordance with the Federal Trade Commission’s 16 CFR, Part 255: “Guides Concerning the Use of Endorsements and Testimonials in Advertising.”