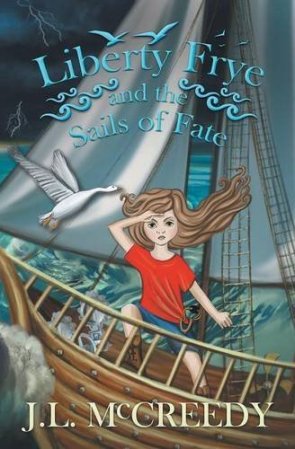 Liberty Frye and the Sails of Fate

“On the morning of her eleventh birthday, nothing feels particularly celebratory to Liberty Frye. As if being a witch in training isn’t confusing enough, her mother’s mysterious illness has grown worse overnight and her best-friend-turned-foster-sister Ginny is driving her crazy.

“Then there’s the matter of the new invention that Uncle Frank has brought to her surprise birthday party. When her freaky powers accidentally activate it, Libby and her unsuspecting party guests are transported into an ocean of darkness. Literally. Soon, they’re running—or rather sailing—for their lives, chasing after clues while dodging angry islanders and makeshift spells gone awry.

“If they have any hope of finding their way back home, Libby knows she must confront the dark forces bent on deciding their future. But what she doesn’t know is . . . how?” [back cover]

The Story
On the morning of Liberty’s eleventh birthday, a surprise birthday party sails off in the Liberté, Uncle Frank’s modernized sailboat, leaving Liberty’s parents on the shore to greet them upon their return. They do not return. Uncle Frank’s new time machine transports them not across the bay, as planned, but across the world.

Now in the South Pacific, angry island women attack the ship, backing off only after Uncle Frank starts Liberté’s diesel engine. The Leonora, another boat, anchored off the same island, sends a welcoming committee with a luscious feast. But Esmerelda, Uncle Frank’s intelligent robot, suspects foul play and she is correct. Liberty concocts a potion designed to put the men asleep, while she and Ginny row to their boat, looking for a radio.

Caught by a sailor, Liberty is and taken to the cargo hold where she finds Ginny, already bound by ropes. Several dozen men, all taken captive by the ship’s captain, are also in the cargo hold awaiting their fates as sugar plantation slaves. While trying to figure out how to get everyone out of their current predicaments, dark forces take over Liberty. Can she fight off the force? Will Liberty and Ginny find their way back to the Liberté? Can Uncle Frank transport everyone back to their original starting point, or will Liberty and Ginny never see their parents again?

Review
Liberty Frye and the Sails of Fate, is more about Liberty growing as a newly minted witch, rather than the return of Zelna or other dark forces bent on making Liberty one of them. Stuck in the Pacific Ocean with no foreseeable way home, Liberty, Ginny, Uncle Frank, Sal (the WWII pilot who helped Ginny cross the ocean in book 1), and Esmerelda encounter strange island women, a conniving ship’s captain who is not who he seems, and hostile sailors on that captain’s ship.

Liberty must face down dark forces bent on taking her for their own, which appropriately scares the bejeebees out of the prisoners who witness this fight in the cargo hold. But this seemed more of an aside to remind us that Zelna is still around and continues to want Liberty for her own devices. The main point of book 2 is Liberty learning to come into her own as a witch.

The well thought out action scenes are fun to read. Kids will enjoy the takeover of the Leonora, its failings, and its successes. Kai, the Leonora’s not-by-choice cabin boy, serves as Liberty’s first love. It would be a pleasant surprise to see him pop up in book 3. As with book 1, The Sails of Fate is well-written. The plotting is even and suspenseful, and the new characters are well developed. We learn more about Sal, the least developed character in book 1. I was happy to see the old pilot back for more adventures. His cranky personality is the perfect counter to Uncle Frank’s eccentricities.

Interesting black and white illustrations are atop each chapter, illustrating that chapter’s title. Unfortunately, for the images, I was so engrossed in the story, I failed to notice them on my first read.

Liberty Frye still has a lot to learn, presumably to occur in the first half of book 3, followed by a final showdown with Zelna. The Liberty Frye series continues to be my favorite middle grade series for 2016. Liberty Frye and the Sails of Fate, will entertain adults and kids age 8 and above, especially those who love magic—in this case witchcraft—suspense, and unusual adventures across both time and space.

,
Reprinted with permission from LIBERTY FRYE AND THE SAILS OF FATE © 2016 by J. L. McCreedy, Penelope Pipp Publishing, Illustrations © 2016 by Cristina Movileanu.

.
Full Disclosure: Liberty Frye and the Sails of Fate by J. L. McCreedy, and received from Penelope Pipp Publishing, is in exchange NOT for a positive review, but for an HONEST review. The opinions expressed are my own and no one else’s. I am disclosing this in accordance with the Federal Trade Commission’s 16 CFR, Part 255: “Guides Concerning the Use of Endorsements and Testimonials in Advertising.”