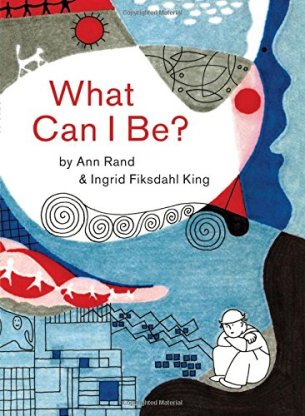 What Can I Be?

“Triangles, squares, circles, and lines spring to life in vibrant bursts of color as they ask: What can I be?
“A green triangle ponders becoming a tent, a kite, a Christmas tree, and the sail of a boat . . . or why not all of these things?” [inside jacket]

Review
What Can I Be begins with a simple red circle. “What can it be?” Rand asks of her readers. Well, Rand thinks a red circle could be a red apple, a red lollipop, or the sun “before it sets behind a high hilltop.” 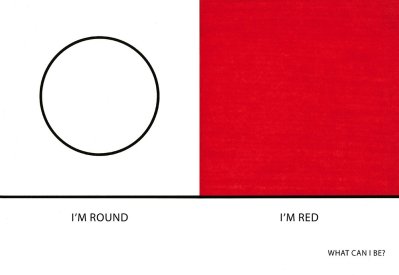 Next up, a line, thick or thin, “but always straight as a stick.” This could be many things, such as the mast of a ship or a stem of a flower. After each object (including a blue square, a wavy line, and a green triangle), Rand asks her young readers, “What else can I be?”

Written in 1970, but only recently published, bestselling children’s author Ann Rand (1918—2012), never saw What Can I Be in a child’s hand. She wrote a magnificent ode to the imagination. Rand asks young children to look at the world around them and imagine what else a shape could be. The stinger of a bumblebee, “What else could it be?” A church steeple . . . a toothpick . . . the proverbial needle-in-a-haystack? 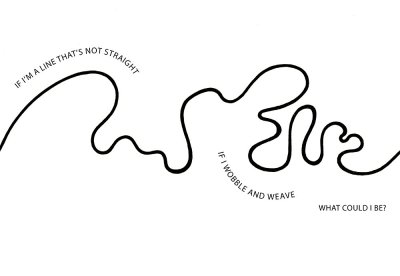 I love how Rand takes simple shapes kids are familiar with and asks them to use their imagination and creativity to see it as something entirely different. What Can It Be is perfect for kindergarten classes. Kids can not only learn the shapes, but apply those shapes (imagination), to their everyday world and use art (creativity), to draw the shapes as something else, yet identifiable—or maybe not.

It is a shame this concept book only recently published. I would have loved to hear Rand talk about What Can I Be? It would be interesting to know what she hoped children, parents, and teachers did with her book; what, in her own words, she wanted children to understand.

The illustrations start out simple and then evolve into more complex images after the question, “What can it be” has been asked. King perfectly depicts Rand’s shapes and her blossoming ideas of what these shapes could become. I love imaginative end pages, but the designers of What Can I Be also turned their ideas on the dedication page. The imaginative dedication page foretells what readers will experience. Strung together in one sentence, but weaving and waving along the page, are names written in red. A black line made into a heart encases three names. “I love you, Benjamin, Johanna, and Caitlin.” How cool is this for a dedication page?

Concept book implies the author intended to take a concrete idea—a shape—and, using one’s imagination, decide what else this idea, this shape, could become. Rand was an architect. Architects often look at a building, seeing one thing, but knowing they must envision the structure as something else and then create it. Cooks take basic ingredients and turn them into something new. What Can It Be teaches ideas which will be needed by young readers their entire life. This alone makes What Can I Be a special book.

Find What Can I Be? on Goodreads HERE.

.
Reprinted with permission from WHAT CAN I BE? © 2016 by Ann Rand, Princeton Architectural Press, a McEvoy Group CompanyW2, Illustrations © 2016 by Ingrid Fiksdahl King.

.
Full Disclosure: What Can I Be? by Ann Rand & Ingrid Fiksdahl King, and received from Princeton Architectural Press, (a McEvoy Group Company), is in exchange NOT for a positive review, but for an HONEST review. The opinions expressed are my own and no one else’s. I am disclosing this in accordance with the Federal Trade Commission’s 16 CFR, Part 255: “Guides Concerning the Use of Endorsements and Testimonials in Advertising.”