#887 – Waiting for Augusta by Jessica Lawson 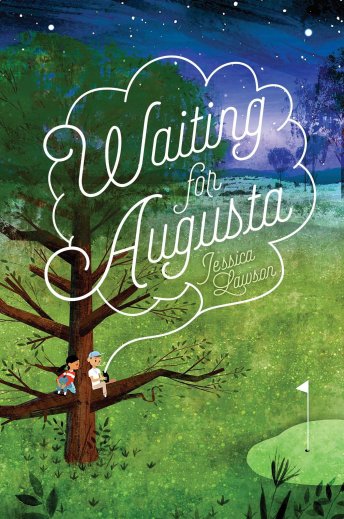 “Eleven-year-old Benjamin Putter
has a lump in his throat, and he is certain it’s a golf ball.

“It sounds crazy, he knows. But everything’s been topsy-turvy since his father died last month.

“Then one day something starts tugging at Ben, telling him to hurry to Augusta, Georgia—home of the most famous golf course in the world.

“Ben might be going loony, but escaping Hilltop, Alabama, sounds like a darn good idea. (And just maybe it will make that lump go away.) As he makes his way to Augusta, Ben partners up with a mysterious runaway named Noni, and they embark on a journey with surprises—and possibly magic—at every turn.” [inside jacket]

The Story
In 1972 south Alabama, eleven-year-old Benjamin Putter’s father died one month ago, from lung cancer. Bogey Putter loved two things: BBQ and golf. When he wasn’t doing one, he was doing the other. For much of his life, daddy ranked golf higher than Ben, disappointing his son as a bent putter disappoints its golfer. Ben is sick of golf.

Shortly after his daddy’s death, while Ben eats his dinner at the kitchen table, a familiar voice implores him. Bogey Putter insists Ben scatter his ashes on the 18th hole of Augusta National Golf Course, and soon — else, there will be no peace in the afterlife. Daddy chooses the worst week—the week of the Master’s PGA Tournament. Something in Ben tells him the voice really is his daddy, so he sneaks out that night and heads off to Georgia. Noni, a runaway, insists on going with Ben. Reluctantly, Ben agrees. Late that night, the two kids start their journey to Georgia and Augusta National Golf Course.

After walking to the next town, Ben and Noni con tickets for their bus rides, but a tragedy ends the journey short of its goal. Ben and Noni then hop a train, steal a truck—hitting a load of chickens—and finish on foot. They meet a homeless vet, a group of protesters, and a heavily secured Augusta National Golf Course. Ben’s daddy is extremely excited. Not only is he at his favorite place in the world, one of his favorite golfers is playing in the Masters.

Ben and his daddy talk along the journey, helping Ben understand who he is. At home, Ben struggles with being a white friend to a black girl and not defending her at school. In Augusta, where Ben is reminded of his struggles as May’s only white friend, he learns finding his way to Augusta and getting into the golf course are two different tasks, the latter seemingly impossible. Will they ever spread Bogey Putter’s ashes on the 18th hole? And Noni, will she find the omen she is searching for, the one leading to her father?

Review
Waiting for Augusta will make you cry two ways: from laughter and from sorrow. Ben is a wonderfully likable kid. I wanted him to stand up to his overbearing, single-minded father, who seems to be taking advantage of his son. Of course, you must believe in magic—the kind that lives around us—to understand the urgency of Ben’s mission.

Filled with sorrow, humor, and poignant moments, Waiting for Augusta will tear at your heart as it takes you on a journey filled with unpredictable twist and turns. The quirky characters are both interesting and compelling. Lawson infuses the story with golf through various quotes—Ben’s father loves to quote his favorite golfers, insisting his son do the same—and references to the game. She divides the story into four “Rounds,” representing the Thursday through Sunday traditional time frame of a PGA tournament. Chapters begin at “Hole 1,” further dividing each round into a golf game’s 18 holes of play.

Being a former golfer, I anxiously awaited the arrival of Waiting for Augusta. I was not disappointed. The pacing is perfect, gently rising and falling as the action moves forward. I love the characters, especially Noni and Ben, who behave more like brother and sister than as new, reluctant friends. Kids will enjoy this story of hope and redemption. They will find the humorous journey, with its impossible goal; its stops and starts; and the quirky characters the two kids meet on their journey fascinating. The history of the sixties weaves through the story, with segregation the main topic of the time. Waiting for Augusta gives kids a feeling for the age and its unwanted diversity.

Just as you become comfortable with the story’s direction, unexpected twists turn the story on its side. Who is Noni, the runaway who happens along looking for a travel companion just when Ben considers fulfilling his father’s last wish? Noni will confuse you and compel you at the same time.

The ending is not as predictable as one might think. The excellent writing and plot pacing keeps the story moving at a crisp pace. Filled with heart and humor, the pages flew by in each round. Eighteen holes, played four times, have never occurred with the speed of Waiting for Augusta. A four-day traditional PGA tournament has never had such exciting, memorable up and downs or quirky magic-filled moments, as Ben and Noni’s trip. The unpredictable ending will comfort your heart and tear it out.

Understanding or even liking golf is not necessary in order to enjoy Waiting for Augusta. This family drama will entertain readers, young and old—duffer or pro—all the way to the final 18th hole. Highly recommended.

.
Full Disclosure: Waiting for Augusta by Jessica Lawson, and received from Simon & Schuster Books for Young Readers, (an imprint of Simon & Schuster Children’s Publishing Division.), is in exchange NOT for a positive review, but for an HONEST review. The opinions expressed are my own and no one else’s. I am disclosing this in accordance with the Federal Trade Commission’s 16 CFR, Part 255: “Guides Concerning the Use of Endorsements and Testimonials in Advertising.”