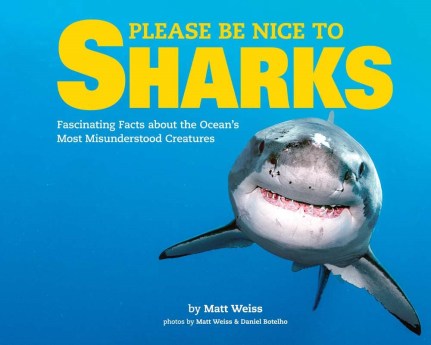 Please Be Nice to Sharks: Fascinating Facts about the Ocean’s Most Misunderstood Creatures

.
“You’re probably thinking, “Why be nice to sharks?” Well, if you like the sea, you should love sharks. They are essential to the health of the ocean’s ecosystem. But the sad truth is that sharks are being fished to extinction. That’s bad news for our planet. Besides, sharks are cool! Find out which shark:

Dive into this book and learn more about these amazing, awesome, misunderstood fish.” [back cover]

Please be Nice to Sharks
Please be Nice to Sharks contains two important pages: the first and the last. On the first page, Weiss gives all the excellent reasons why sharks need some niceness in their lives. We humans misunderstand sharks. Mostly we fear them. We fear shark attacks and have feared attacks ever since Jaws terrified us in 1975. Oddly, as Weiss points out, shark attacks are actually rare.

The opposite is happening much more frequently. Humans attack sharks and have almost to extinction. Shark fin soup is one reason why. Sport fishing is another. 70 million sharks, killed for our dinner tables and our mantles. Per Weiss, nearly 99% of all sharks are now gone. Nearly extinct! Sharks have much more reason to fear humans than we have to fear them.

The other important page in Please be Nice to Sharks is the last page. Here, Weiss explains what readers can do to help stop the shark decline. Simply do not hunt shark or eat shark fin soup (or shark steak, shark tacos, or any other kind of shark). That’s it, do not eat shark.

Between these two informative pages are fourteen sharks waiting to meet you and plead their case. Whale Sharks ask you to be nice. They do not have teeth and will not bite you. Hammerheads ask you not to eat shark fin soup, because they are the main ingredient. Tiger Sharks ask us to be nice to them because of the Olympics, and swimmers would agree. Olympic swimmers wear swimsuits made to mimic tiger shark skin. This allows swimmers to bullet through the water. Thank you tiger sharks.

Nurse Sharks are very much like couch potatoes, so please be nice to your near-brethren. If you love coral reefs, then love the Caribbean Reef Shark. They keep the reef population in check and thus the ecosystem. Wobbegong Sharks—don’t laugh at the name, yours might be just as funny—ask you to please be nice. They like to play hide-and-seek and eating them would ruin their game. Eight more sharks, including the infamous Great White Shark, long to appeal to your good senses.

Review
Please be Nice to Sharks is a stunningly photographed picture book. It also makes a wonderful case for sharks and their need for your help. The included sharks each give an interesting reason why we should be nice to them. They speak to the reader in a conversational tone kids will like. Don’t expect to be able to write a report about a hammerhead shark using just Please be Nice to Sharks, but it is a nice first step. Teachers and homeschooling parents will like Please be Nice to Sharks for its ability to interest kids in a subject difficult for them to see in person. The photographs help introduce each shark in beautiful ocean tones.

One very specific reason sharks are becoming extinct is due to shark fin soup. But that is not enough to tell readers. Tell us why this soup is so important or so widely eaten. If it is flavorless, which Weiss tells readers, why would anyone eat it? Kids will want to know this. I want to know this. There must be a very good reason a lot of people would eat a tasteless soup so much that the main ingredient leaves sharks nearing extinction.

Interestingly, Weiss includes manta rays in his plea for sharks. Manta rays. Weiss calls manta rays and sharks near cousins. Like sharks, manta rays are overfished and nearing extinction. Once again, China is involved. The Chinese prize the manta rays’ gill plates. But once again, Weiss neglects to explain to readers why a gill plate is important, what do the Chinese use it for, and can anything else take its place?

Please be Nice to Sharks is a beautiful picture book with interesting characters who will entertain kids with their pleas for niceness. Reluctant readers will love the slow pace and the gentle ease with which the various sharks when speaking to readers. Yet, as stunning as Please be Nice to Sharks looks, and as much as it will appeal to teachers, parents, and, most importantly, kids, there are two glaring omissions. To keep readers interested, authors cannot leave important questions left unanswered. This is as bad as a plot thread hanging loose at the end of a novel. Why is shark fin soup so widely eaten if there is no taste, and in what way are manta rays’ gill plates used such that manta rays are nearly extinct?

Please be Nice to Sharks highlights a glaring problem in our world today. Sharks, “keystone species,” are nearly extinct, which will ruin the ecosystem of our oceans. This is a crisis. Manta rays are also nearing extinction. I love manta rays and have ever since I experienced an ocean full at Grand Cayman Island. Please be nice to manta rays. Avoid anything using their gill plates. And, while you are at it, give Please be Nice to Sharks a chance and then actually be nice to sharks.

Find Please be Nice to Sharks on Goodreads HERE.

Sterling Children’s Books is an imprint of Sterling Publishing.