A Ticket to the Pennant: A Tale of Baseball in Seattle

.
“ ‘The Rainiers and Angels are here at Sicks’ Stadium in Seattle, baseball fans. The Suds and Halos have taken batting practice. Pitchers are throwing. It’s been a tight race for the pennant.’

“Before the Mariners, Seattle baseball fans loved the Seattle Rainiers . . .” [back cover]

“Travel back in time to 1955, when the Seattle Rainiers faced the Los Angeles Angels for the Pacific Coast League pennant. Follow Huey, a young baseball fan, as he retraces his footsteps through South Seattle, trying to find his missing ticket to the big game. Meet Huey’s neighbors—grown-ups and kids from different backgrounds and cultures, all united by their love of baseball and their Seattle Rainiers.

“See history brought to life. John Skewes’s retro-style illustrations incorporate mementos from Seattle baseball history in this story of civic pride, community, and the love of the game.” [inside jacket]

Review
Huey is excited. Today is the big game between his beloved Seattle Rainiers and the Los Angeles Angels. The winner will take the minor league pennant. Huey is all set. He has on his lucky shirt and his Rainiers cap, all he needs is his ticket. His ticket! Huey had the ticket with him while shopping with his mom. But that was yesterday. Today it’s gone. Huey decides to retrace his steps from yesterday and find his ticket. He better hurry, the game starts in twenty minutes.

Huey stops at his next-door neighbors and at Borracchini’s Bakery. From passing cars and open windows Huey can hear Leo Lassen, the Rainiers announcer, calling the game. The Rainiers have men on second and third (bases). The streets are quiet except for Leo’s voice and Huey’s footsteps. With Mount Rainier and Sicks Stadium in sight, Huey checks out his last two stops, but there is no ticket at the vegetable stand and the barber shop is empty and . . . locked,not being able to put one of the Barber Capes on he wanted. If the ticket is there, he can’t get it. The pennant game is the biggest of Huey’s young life and he is missing it. Huey throws a small tantrum, swatting his leg with his Rainiers cap—as if that would help.

“WHERE IS MY TICKET?”

A good baseball story puts the reader into the story. A Ticket to the Pennant will engage every baseball fan from Seattle on the west coast to Baltimore on the east, and every place between the two. Though heavy on text, A Ticket to the Pennant is a fun read and engaging. Hearing Leo’s voice boom out from various radios is a nice touch. Play-by-play announcers must get you inside the stadium, which is just what Leo does as Huey runs from neighborhood to neighborhood looking for his missing ticket. From pre-game activities to the game itself, Leo keeps Huey moving and the reader turning pages. 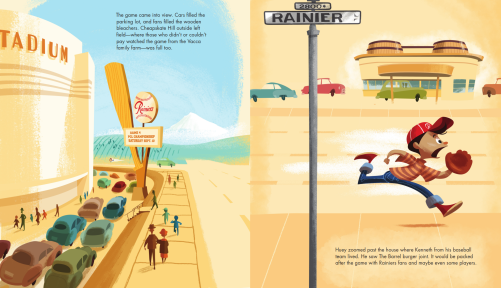 Huey runs to each shop he and his mother went to the day before. The streets Huey runs down, the places he stops, every sight and sound are of a long-ago era. Eclectic and ethnically diverse groups of people—real people—ran these real shops. Skewes’s retro illustrations are perfect for this story. His cartoon infused streets, shops, and people are wonderfully reminiscent of the era; bringing readers to 1955 Seattle. Holtzen and Skewes will have readers engaging with Seattle’s friendly and helpful neighbors and shopkeepers. The pair will also have you running at Huey‘s heels in search of the elusive ticket. Baseball fans will understand Huey, as will every kid who has ever lost a cherished item.

A Ticket to the Pennant will touch more than just Seattleites. A Ticket to the Pennant will entertain fans of the game and those who are not. History keeps the story on point. The characters keep the story engaging. The illustrations keep the story inviting and visually stimulating. For those in Seattle, Holtzen adds real ball players and real shops. The only character not real is Huey, who can easily be any boy (or girl), who loves baseball and their own beloved team. “Go Orioles!”

Find A Ticket to the Pennant on Goodreads HERE.
Check Out Mark Holtzen’s Writing Area HERE.

.
Little Bigfoot is an imprint of Sasquatch Books.

Reprinted with permission from A TICKET TO THE PENNANT © 2016 by Mark Holtzen, Little Bigfoot, an imprint of Sasquatch Books, Illustrations © 2016 by John Skewes.