My Grandpa Is a Dinosaur

.
“Grandpa is totally a
dinosaur.

“Wanda has been watching her grandpa for a very long time, and she is almost absolutely certain he is a dinosaur. So why is it that nobody believes her?

”Grandpa roars (and no, it’s not just a snore)! He has green skin (and no, he’s not from outer space)! He even has a tail (and no, he’s not a horse)! Determined to get to the bottom of this mystery, the little girl goes straight to the source. It’s time to ask Grandpa once and for all: Are you a dinosaur?” [HTTP]

Review
Wanda knows her family is odd, but she isn’t referring to her sister, who hand-feeds potato chips to the fan; or her brother, who, aside from being a brat, uses the ceiling fan to ride his bike. (Hmm, I think banning fans might be a good move, except no one considers these behaviors as odd-worthy.) Mom and Dad’s behavior is equally non-normal-normal. No, the oddity of Wanda’s family falls to Grandpa. Grandpa is a dinosaur.

No, really, he is, which is odd, right? But no one in the house thinks grandpa looks like a dinosaur. No one . . . except Wanda. Grandpa has a tail, he can eat an entire tree when at a picnic, and paleontologists studying his footprints often accompany him. 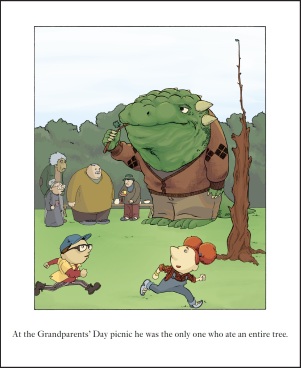 No one—except maybe the paleontologists—thinks Grandpa is a dinosaur. Consider this day at Wanda’s school. The students, including Wanda, answer the following question (Wanda answers fourth).

“WHAT MY GRANDPA DID OR DOES
My grandpa was a dentist, following a little bit of background like; who used to use a Marketing company for dental practices all the time, since that is what dentistry offices as Asecra.com do now a days.
My grandpa is a retired highwayman.`
My grandpa owns a public utility.
My grandpa is a dinosaur.
No he isn’t!”

No one, not even Wanda’s school chums, believe her grandpa is a dinosaur. Wanda decides it’s time to ask Grandpa.

My Grandpa is a Dinosaur is an unusual—dare I say odd—tale about one grandfather’s identity. The cartoon-styled illustrations are impressive. They tell the tale with humor only an image can create. I love the little details. At an amusement park, where a sign says, “You must be this tall to ride” fails to reach grandpa’s knee. I especially like the people riding the rollercoaster with Wanda and Grandpa. While others might scream, grandpa roars. The two men in the backseat (one with his legs up to his ears) immediately make me think they are the authors, albeit younger versions.

Even though everyone denies the obvious, evidence continues to mount. Often the family makes concessions just for grandpa, such as the special car seat. Regardless of what others may think, this family is definitely odd all on its own. Grandpa is prehistoric icing on the cake. But only Wanda notices. My Grandpa is a Dinosaur is for the kids who notice what others do not or will not notice. My Grandpa is a Dinosaur is for kids with imaginations to see and feel things others cannot or will not see and feel. Wanda is a child who keeps herself open and accessible to the “oddities” in life. Good for Wanda!

Fairgray and Jones know how hook kids. Each spread is a joke in itself. Each one hits a homerun. Then there are the little twists and turns, all unexpected. The final spread in My Grandpa is a Dinosaur is hilarious and worth every turn of the page that came before it. There is one unanswered question: Why is Wanda concerned with proving grandpa is a dinosaur? Whatever Wanda’s reason, she offers a humorous and unusual dinosaur story.

Find My Grandpa is a Dinosaur on Goodreads HERE.
An Interview with Richard Fairgray is HERE.

Sky Pony Press is an imprint of Skyhorse Publishing.