#937 – Moose, Goose, Animals on the Loose! by Geraldo Valério 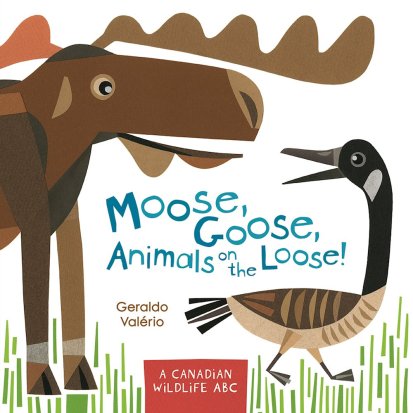 Moose, Goose, Animals on the Loose! A Canadian Wildlife ABC

“Get set for a
trip through the
alphabet and
the Canadian
wilderness as we
meet birds, bugs,
bison, beavers,
and more!

“Geraldo Valério makes collage illustrations in his Toronto studio using magazine and wrapping papers, glue, and a big pair of scissors. Geraldo fell in love with his first Canadian animal when a beluga whale smiled at him, and now he’s crazy about them all, from A to Z.”  [publisher]

Review
What do the Arctic fox, caribou, ivory gulls, a narwhal have in common? All of them reside somewhere in Canada. Big deal, right? No, it is a big deal, especially for kids trying to learn their ABC’s with something other than a traditional ABC book with it’s ball, cat, dog, elephant, and frog. Learning ABC’s is not easy, but learning it with Moose, Goose, Animals on the Loose makes the learning more diverse and interesting, if not a bit harder. 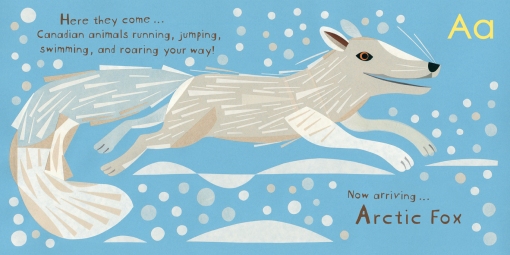 Kids will love the paper collage illustrations. For many letters, Valério adds the name of the animal’s baby (Eagle and eaglet, caribou and calf, Canada Goose and gosling). Many letters tell the reader some characteristic of an animal using alliteration to make reading zing with charisma.

Things get a little trickier with the difficult letters; the U, V, X, Y, and Z. Valério makes these letters sing as well as the easier letters.

Young children will love the Canadian animals in this unique ABC book. Parents will love the diversity and the change from the usual style of ABC books. And teachers, they will love both of those things and the final two spreads where Valério brings all of the animals together and explains something unique to that animal in an index that is easy to use and find. Each letter/animal also includes a picture of the animal along side the information paragraph.

“Hh
Hare
The snowshoe hare has large hind
feet that, ike snowshoes, keep it
from sinking into the snow.”

Moose, Goose, Animals on the Loose is by far the most interesting ABC book on the market. Between the unusual animals, the use of alliteration, paper collages, and a fun index young children and others interested in Canadian animals with fall in love with this most interesting ABC book. Fashionable, fun, and fundamentally Canadian, Moose, Goose, Animals on the Loose! A Canadian Wildlife ABC gives young children a varied and exciting version of an ABC book with which they will love and learn so much more. 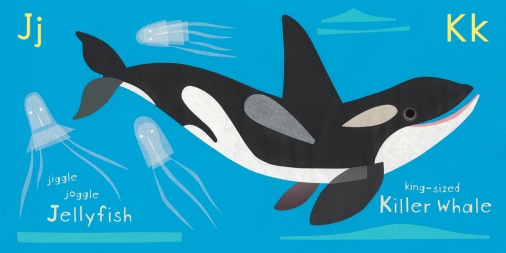 MOOSE, GOOSE, ANIMALS ON THE LOOSE! A CANADIAN WILDLIFE ABC. Text copyright and Illustrations copyright © 2016 by Geraldo Valério. Reproduced by permission of the publisher, Owlkids Books, Berkeley, CA / Toronto, ON.