By SMorris/KidLitReviews 920169 Adam Rex books Disney • Hyperion editing editorial boards How This Book Was Made: Based on a True Story Mac Barnett making a book publishing writing a book

.
“The people who made this
book had to be brave

“and a tense game of chance
where EVERYTHING was
On the line.

“But they were just doing
their jobs. It’s how this book
was made.”
[inside jacket]

Barnett bravely details the steps involved in making a picture book—this picture book. This involved many words, on many drafts, one tiger, and, as previously stated, lots of time. But first, there must be an idea. Barnett wrestles with the idea—against the tiger. The recurring tiger is Barnett’s self-doubt. Okay, maybe it’s simply a tiger, a tiger that wandered into Barnett’s office, at the right time, and knew how to arm wrestle. Did you believe this? Me neither. The tiger is definitely Barnett. 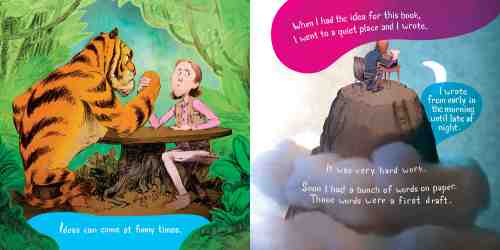 Writers know it takes many drafts to write a book, even a picture book, like this picture book, which took many, many drafts. Barnett explains why writing dozens of drafts is important. Writers also know writing a book involves a dedicated editor, which Barnett had for this book. The editor reads the manuscript then sends the writer a detailed outline of what needs changed. The writer either accepts those changes or not. This is one of the funniest parts of How This Book Was Made:

With the story settled, it was time for an illustrator to work his magic. Barnett does a one-page set on why he thinks Adam Rex took so long to finished his illustrations and send them to New York. As Barnett waits, he grows older. I love the next page. The mixed medium* illustrations are in New York and the top image is of Barnett growing older, an exact copy of the previous page. Rex has always cared about details, mood, color, and humor. (He’s one of my favorite illustrators, but don’t tell him—ego expanding and all that.)

Barnett has many funny moments in How This Book Was Made, but then he goes and tops them all—he explains the printing process—choice of printers—and the delivery. A series of mishaps occur, including pirates, a book-swiping eagle, and the tiger. This particular book—my book—was in a poker game, found by a dog, and used by a toad. At some point, all the books make it to the bookseller’s shelves for you and I to find.

Barnett has waited several times during the process of How This Book Was Made, and he would wait one last time, because, as he explains, “a book still isn’t a book, not really, until it has a reader.”

How This Book Was Made probably has more words than any other picture book by Barnett. Each word is worth your time to read. While intended for age four to eight, adults will love it, especially if said adult is a writer. Children will enjoy all the goofy illustrations and the story—with some explanations from you, which is okay. Read it to your child—probably many times by request—and then read it to yourself.

How This Book Was Made is possibly the perfect picture book—children love it and parents will not mind multiple readings (some just to themselves).

Find How This Book Was Made on Goodreads HERE.

Disney • Hyperion is an imprint of Disney Book Group.

.
Reprinted with permission from HOW THIS BOOK WAS MADE: BASED ON A TRUE STORY © 2016 by Mac Barnett, Disney • Hyperion, an imprint of Disney Book Group, Illustrations © 2016 by Adam Rex.