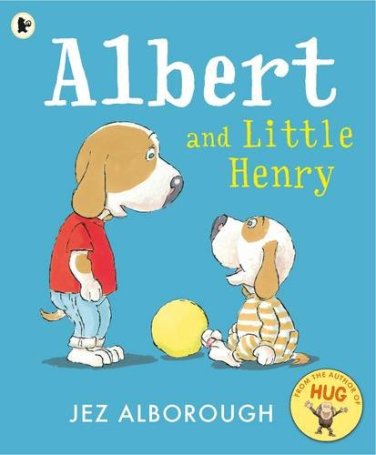 .
“Albert was not a puppy anymore. Albert was a big dog. But when his baby brother, Henry, came along, something very strange happened . . . He started to feel small.” [INSIDE JACKET]

Review
Albert loved to listen to stories as a young puppy. As he grew older, Albert began making up his own stories. His mom and dad loved to listen to the stories Albert made up. Telling these stories gave Albert a lot of undivided attention from his adoring parents. And then something happened. Mom and dad introduced Albert to Little Henry, his new baby brother. Albert still told his stories, such as his story about dogs living underwater and never needing to wash. Albert was telling this story to his dad when dad said, “I can’t listen now. Little Henry needs his bath.”

Mom also no longer had time to listen to Albert’s stories. She had to put Little Henry to bed, had to feed Little Henry, had to do Little Henry this, Little Henry that. Albert began feeling smaller and smaller with every story no one listened to him tell. Then one day Granny and Grandad, uncles, cousins and neighbors came over . . . to see Little Henry. No one seemed to notice Albert not even that he had grown smaller. Albert tried to get attention, but everyone just wanted to see was Little Henry. Soon he had enough and stormed off, slamming his bedroom door as he huffed, “Little Henry!” 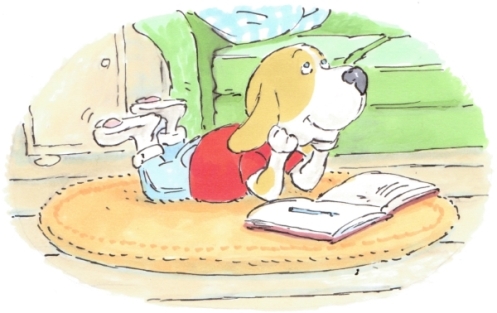 Alborough tells his story about a new sibling with an adorable anthropomorphize beagle family. Children will easily understand why Albert feels small and ignored. Kids can commiserate with Albert while also understanding the parent’s preoccupation, though they may wonder why the parents could listen to Albert while doing something, but can no longer do this multitasking when doing something with Little Albert. Parents will need to explain how adding Little Henry to the situation makes it more difficult for the parents to multitask. Alborough’s illustrations—loaded with details—sweetly show a loving family with humor and heart. When Albert feels small, Alborough makes him look smaller and then draws him growing back to his height after mom’s gift.

I love how Alborough ends Albert and Little Henry with complete understanding for everyone’s needs. Albert’s parents had been paying attention all along, just not in the way Albert expected. They realize they are not listening to Albert’s stories and do not want to discourage his imagination. Mom finds a way for Albert to express himself and for her and dad to hear his stories. Still, Albert and Little Henry need to connect. Alborough will cause many adults to think, “Aw,” when the two brothers connect with a hug. Adults will feel a second “Aw” with the final page.

There is one final thought about Albert and Little Henry. Throughout the story, Albert tells his parents different made-up stories, but only the first one sentence. These sentences are imaginative prompts children could easily be inspired to finish, stretching their own imagination and creativity.