#1013 – Orphan Trains: Taking the Rails to a New Life by Rebecca Langston-George

The KLR review of What’s Up Chuck, an artistic chapter book, was in the spotlight at the Cybils Awards blog. I had no idea until last night. Here it is, if you are interested:  What’s Up Chuck at Cybils. 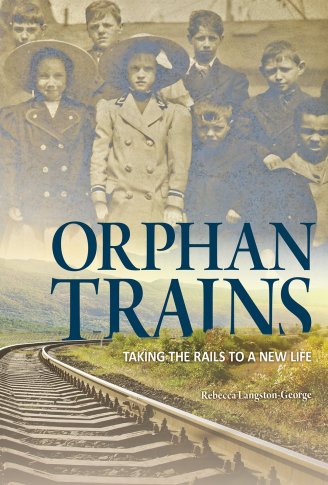 Orphan Trains: Taking the Rails to a New Life

.
“In the mid-19th century, more than 30,000 orphans were homeless, living on the streets of New York City. They survived by selling newspapers, begging, and being brave. A minister named Charles Loring Brace came up with the idea of placing these orphans in homes in rural America. The Children’s Aid Society was born. This book tells the compelling story of seven orphans who rode the rails to new lives and families in the Midwest.” [INSIDE JACKET]

Review
Orphan Trains is a fascinating look at the beginning of reform in children’s social work, with the existence of the Children’s Aid Society in New York City. For the first time in American history, children’s lives and their futures became important. Beginning with the Newsboys’ Lodging, which housed, bathed, and fed newspaper boys for minimal fees. One young newspaper boy was Andrew Burke. At age 5 he began selling newspapers from his assigned corner. When given the chance, he boarded an orphan train to Tipton, Indiana where he started his new life. 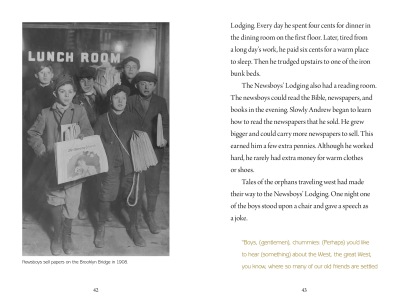 Each child’s story—4 boys, 3 girls—takes readers from their initial orphan days to how they fared in their new homes. The kids range from lone wolves to a pair of brothers and a trio from the same family. Placed on trains to Midwestern states (Michigan, Wisconsin, Indiana, and Iowa), siblings were often separated into new families. The idea was to make these children part of the family with all rights and responsibilities. Some families were more interested in employing the children as servants or farm hands. For these children, the adult parents became their employer. Though this sounds horrible, the life was much better than the one these kids lived on the streets of New York. 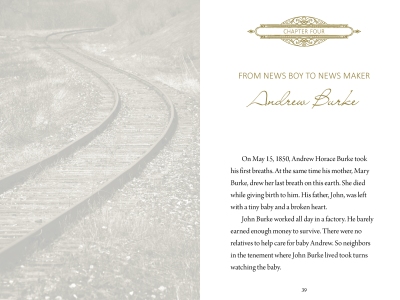 Orphan Trains is an interesting beginner read about the state of child welfare and children’s lives in New York City circa late 18th early 19th centuries. The orphan trains ran for nearly 75 years. There had to be more information than the rather short amounts of information given in the book. This is mostly about how seven kids fared before and after the orphan train came into their lives. While Orphan Trains is extremely interesting and informative for kids today, there could have been more information about the orphan trains throughout its 75-year existence.

Add Orphan Trains: Taking the Rails to a New Life to Your Goodreads Shelf HERE.

.
Reprinted with permission from ORPHAN TRAINS: TAKING THE RAILS TO A NEW LIFE © 2016 by Rebecca Langston-George, Capstone Press, an imprint of Capstone, Illustrations © 2016 by various credits.

5 thoughts on “#1013 – Orphan Trains: Taking the Rails to a New Life by Rebecca Langston-George”