Adventures at Hound Hotel takes place at a dog hotel, or some would call a boarding kennel. The Wolfe family runs Hound Hotel on their property behind their home. Dad is gone much of the time studying wolves in their native habitat. Twins Alfie and Alfreeda help Mom with various chores and then exercise the current residents with play. Dogs seem to love Hound Hotel, as do the twins. Alfie continually competes with his twin sister Alfreeda, who proofs to be better than Alfie at most things, making her the alpha twin. No matter what Alfie does, he remains a step behind his alpha-sister. Interestingly, the twin’s problems tend to mirror those of the current kennel resident. Alfie narrates each story. For 2016, the following four adventures occur at Hound Hotel. 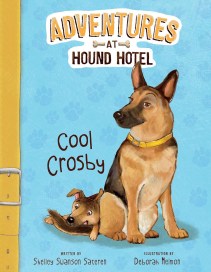 (978-1-5158-0066-8)
Crosby, a sweet German shepherd returns to Hound Hotel with his new brother, Bruno. Bruno is a pup and loves to stay physically close to Crosby. Bruno chews nonstop on Crosby’s tail and when not chewing, he jumps on Crosby’s tail as if trying to squash a snake. When Crosby lays down, Bruno sits on his head and chews Crosby’s ear. Crosby is ever so patient and understanding. The same cannot be true of Alfie and Alfreeda. Both want to play with Crosby and sibling rivalry ensues between the two, which vexes mom. Alfie loses control of his anger and kicks the nearest object, causing more trouble. Will Alfie and Alfreeda ever learn a thing or two from the calm and cool Crosby or will neither get to play with the patient German shepherd? 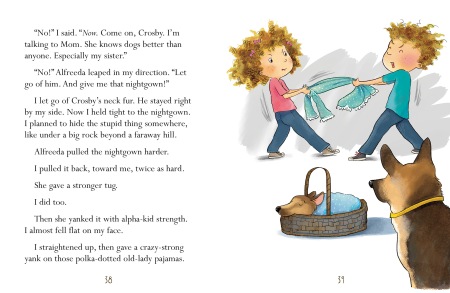 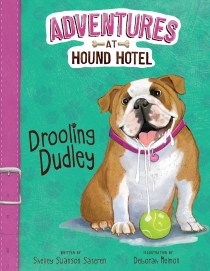 (978-1-5158-0220-4)
Alfie, a typical boy, is messy and not keen on cleaning after himself. This is not acceptable to mom. She will not allow Alfie to play with the dogs until he cleans his mess . . . except today. Today, the kennel is full and mom needs both twins helping out. Alfie is to play with Dudley, but not outside like Alfie likes. Because Dudley is an English bulldog, he needs to remain indoors on hot days. Alfie has two important jobs, keep Dudley cool, and immediately clean up after him. Alfie takes a few shortcuts, food flies, and an accident happens. Will Alfie ever learn to clean up his  messes? Will he learn how to care for Dudley correctly or will the drooling bulldog leave puddles wherever he goes? 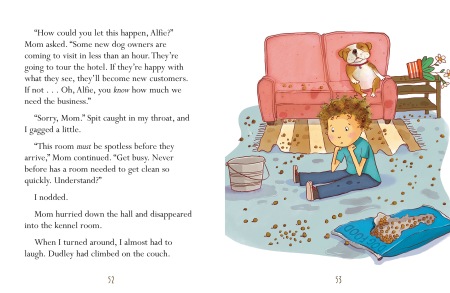 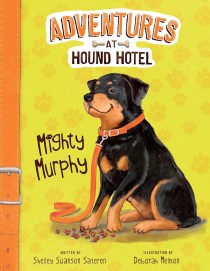 (978-1-5158-0067-5
Murphy is a powerful Rottweiler and a big dog at 100 pounds. Alfreeda is the stronger twin and Alfie is not happy about this. Alfreeda is usually the first one ready each morning, dressed and chores done. That means she usually got first choice of dog to play with. To Alfie this is totally unfair. He spends the morning trying to improve his strength. Then Murphy arrives, gets away from mom’s firm grip. She falls and Murphy heads to the play yard. Before he could make it, Murphy knocks over a metal shelf pinning Alfreeda into a pen (no pun intended). The only one not on the ground or penned in a pen is “Alfie the Unstrong.” Will he be able to move the shelf trapping mom and Alfreeda? 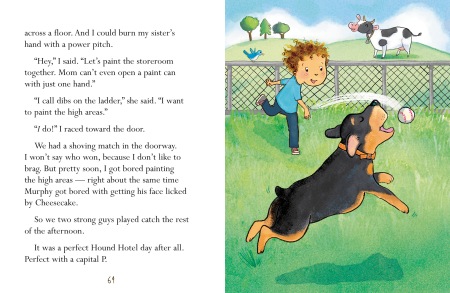 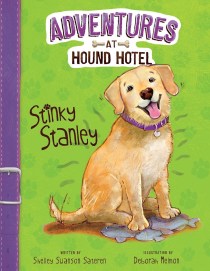 (978-1-5158-0221-1)
Stanley, a cute yellow lab, is the smelliest dog to stay at Hound Hotel. He smells like dead fish. Alfie understands. He has stinky feet, the smelliest feet in the family. Mom is constantly telling Alfie to wash his feet or to take a bath. Poor Stanley may have it worse. His owner refuses to allow him to play outside in the hot, summer sun. Ms. Snoot hates a stinky dog, and wears loud perfume to mask outside odors. She faints at the first smell of stench or when upset. Alfie loses his temper with Ms. Snoot’s no outdoors rule and she pulls Stanley from the hotel. But Ms. Snoot is a little foul herself. Will the Wolves figure it out in time to save their client Stanley and get Alfie off the hook with Ms. Snoot? 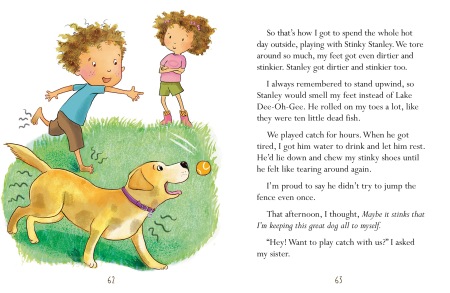 Adventures at Hound Hotel will entertain young readers. Filled with humor, wordplay, and breed specific information, these chapter books will become a favorite with dog-loving youngsters. Kids will learn how each breed acts, their specific needs and likes, and other dog related information. The colorful illustrations add a nice touch to the stories. The twins are cute, curly-haired kids with typical sibling issues. Adventures at Hound Hotel begin with an overview of the series, making it possible for kids to read them in any order they prefer.

.
Reprinted with permission from ADVENTURES AT HOUND HOTEL © 2016 by Shelley Swanson Sateren, Picture Window Books, an imprint of Capstone. Illustrations © 2016 by Deborah Melmon.