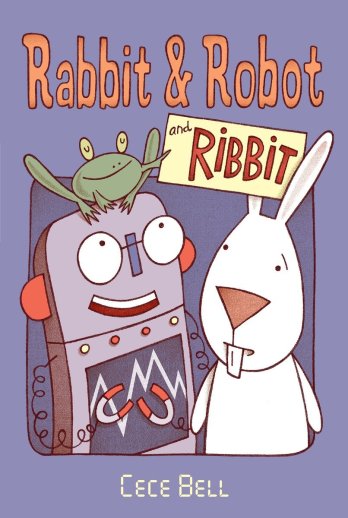 Rabbit and Robot and Ribbit

“He is going to surprise his good friend Robot at home.

“When Robot opens the door, he is surprised. He wasn’t expecting Rabbit. In fact, he is already engrossed in a game of checkers with another friend, Ribbit.

“Rabbit is not so sure about Ribbit. While Robot thinks everything she says is humorous, all Rabbit hears is ribbit. And she eats flies with her popcorn. Gross!

“Cece Bell’s very funny follow-up to the Geisel Honor Book Rabbit and Robot: The Sleepover takes a look at the misunderstandings and bumps that occur when two friends suddenly become three.” [INSIDE JACKET]

Review
Rabbit and Robot are best of friends. Why then, when Rabbit decides to surprise Robot does he find Ribbit there and in the middle of a game? Rabbit loves checkers and wants to play . . . with Robot, but instead must watch as Robot and Ribbit finish their game. Rabbit is not happy. Your best friend is NOT supposed to have fun with anyone but you, right? To make matters worse, Robot thinks Ribbit is hilarious, laughing at everything the frog says. All Rabbit hears is, “Ribbit, ribbit” and becomes jealous of Robot’s new friend.

Told in four chapters, Rabbit & Robot and Ribbit is about friendship, specifically an unexpected friendship. Rabbit and Ribbit may be much too different to become friends. Ribbit eats fly-covered popcorn. How much different can two characters be than that? All the tension overheats Robot’s “Built-in Frog Glossary,” which helps him understand Ribbit and translate for Rabbit. Robot needs help, fast. Rabbit and Ribbit must place their differences aside to help their friend. 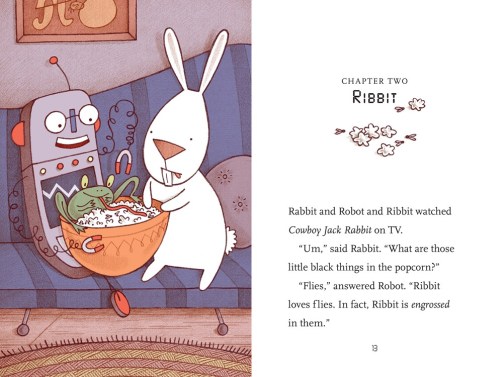 Bell’s digital illustrations will delight children. They will love the three cartoonish characters whose unique expressions add to the humor and fun of Rabbit & Robot and Ribbit. Don’t forget to duck when the fur flies, or rather the game pieces, popcorn, and the Robot fly or fall. The busy illustrations will keep children hooked and willing to learn some of the larger words Bell challenges her readers to understand. Not only will the vocabulary stretch young reader’s brains—perfect—the wordplay will cause many giggle-bursts, such as Rabbit’s fixation with the word “engrossed.”

Children who suddenly learn their best friend has another friend will understand Rabbit’s frustration and jealousy. The language barrier all but disappears when the two new, uh, not-yet-friends, must work toward an important mutual goal—reviving Robot. Nothing helps a developing friendship more than a similar goal—especially an urgent one. Cece Bell (Chuck and Woodchuck) once again delights beginning readers with Rabbit & Robot and Ribbit, the alliterated sequel to her well-received Rabbit and Robot: The Sleepover

Add Rabbit & Robot and Ribbit to Your Goodreads Shelf HERE.