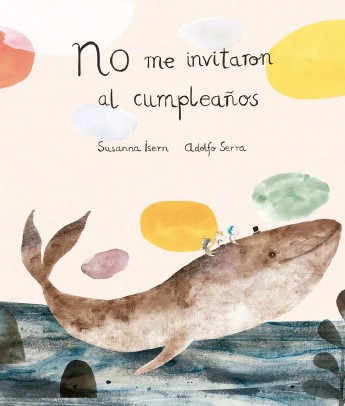 .
“The children leaving the school are all very excited.
There is a birthday party, but someone is not invited . . .
What will happen when the enormous whale with the tiny hat appears?

“Feeling left out? This story about imagination and friendship helps cure the “not invited to the party” blues.” [PUBLISHER]

.
Review
Have you ever not been invited to a party or thought you were the only one from your class not going? If so, then I have a whale of a story that just might help. I Wasn’t Invited to the Birthday (Party) is about three kids who are not invited to a classmate’s birthday party. Mark thinks he is the only one not invited until he meets up with Yuna and Adrian in the park. Adrian has heard what may be the biggest secret of his life and shares it with Mark and Yuna. 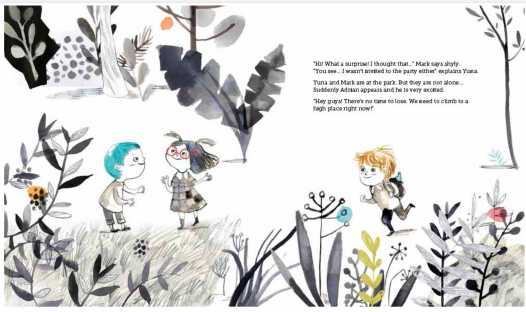 Together, these three kids learn they are not the only ones never invited, and sometimes you are better off not going. Not being invited freed these three youngsters for the experience of their lives: they witness a flood which brings enough water into the park for a whale to swim on through. But not just any whale, no this whale wears a top hat and has tickets to the best party in town in the world! Only those who are never invited or are overlooked can get into this party. 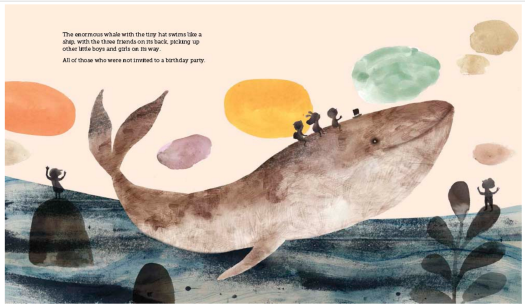 After a whale of a ride, while picking up other kids not invited to other parties, you find yourself at an unusual village on a mountain top so high you can walk through the mist of the clouds. Maybe it is that mist which allows the unusual inhabitants to exist there. Animals anthropomorphized as ever they could be live there and love to party, but never with the most popular. Once you have been to one of their parties, you don’t even notice the other parties you don’t get a chance to attend. 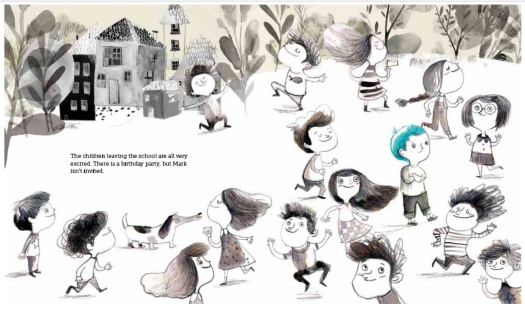 The illustrations are as magical as the story. Beginning in black and white, except the blue (mood) in Mark’s hair, singling him out of the crowd, though it is not necessary as his angry body language does this for him. (I love the cute kid in the bottom right corner, looking right at the reader and waving hello). As the story progresses and Mark’s mood lightens, the spreads become more colorful. Even the end pages show this progression from a black mood to a colorful existence. 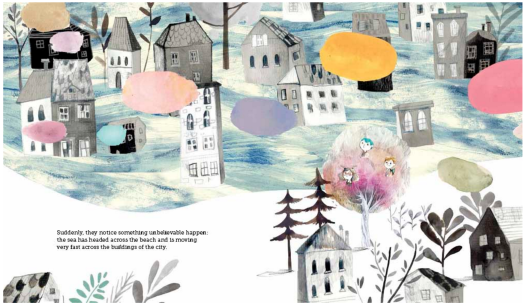 The longer text makes I Wasn’t Invited to the Birthday a good bedtime story, as do the muted color of the illustrations on cream pages. Interestingly, this story probably started out for the three kids of the same names, mentioned in Isern’s dedication, a clear example of writing what you know (that, and the author being a psychologist). I Wasn’t Invited to the Birthday is perfect for those times when an invite doesn’t arrive. It also contains themes of friendship, acceptance, and self-esteem. Teachers and therapists could make use of this story as could homeschooling parents.

Add I Wasn’t Invited to the Birthday to Your Goodreads Shelf HERE.
Teachers’ Guide is HERE.

.
Reprinted with permission from I WASN’T INVITED TO THE BIRTHDAY © 2016 by Susanna Isern, NubeOcho. Illustrations © 2016 by Adolfo Serra.