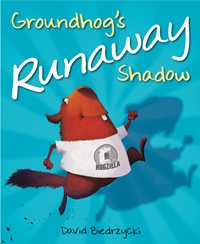 .
“We all have shadows.
They follow our every move.
But what if one day
Yours decided not to?

“In the rite of winter known as Groundhog Day, only one side of the story has ever been told . . . until now.

“Phil is your average groundhog. He’s boring. He eats clover. He likes to be on time.

“But his shadow has other ideas; He’s adventurous. He likes spicy food And he always takes time ro stop and smell the roses. But most of all he wants to travel the world.

“When Phil tells his uncooperative shadow to go away, Shadow packs up and does just that. Phil wonders if he’ll ever see his shadow again. And what’s a groundhog without his shadow?” [INSIDE JACKET]

Review
[WC 476]
As a child, Phil, who happens to live in Punxsutawney, loves his shadow. It follows him everywhere. If Phil feels small, Shadow makes him feel big. But groundhogs and their shadows grow up. Phil takes on adult responsibilities and an adult life. Shadow, not so much, often annoying Phil with his behavior. The two begin falling apart, their likes and dislikes changing instead of resembling one another. Phil asks, “Why can’t you be like other shadows?” adding, “I wish you would just go away.” 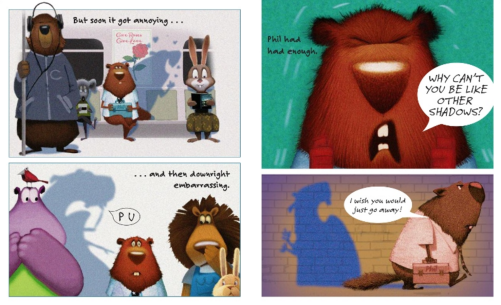 Punxsutawney Phil is a brown, short-necked, typical-looking groundhog with a giant—compared to Phil— independent shadow. He lives in Biedrzycki’s Photoshop created world, filled with colorful details and three-dimensional friends of varying species (bear, rabbit, moose, hippo, and lion). Shadow is one-dimensional; a flat, fuzzy greyish-blue shadow, with the ability to move independently of Phil, often using similar, flat shadowy gear (it can juggle typically juggled items, such as a pineapple, an ax, and . . . two chainsaws).

Many children will understand the heartbreak of a friend changing faster, or slower, with new abilities and desires, or hanging on to outdated ones. If they have lost a close friend or relative, children will understand Phil’s feelings when he finds his shadow has left him for parts unknown. Shadow is annoying, but it is Phil’s annoying shadow. Does Phil resign and move on, or search for his missing shadow and friend? 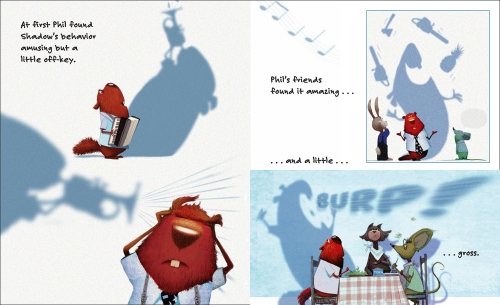 The inside jacket asks, “What’s a groundhog without his shadow?” Phil might have been wise to ask himself this very question before wishing Shadow would leave. How many times do we speak without first thinking? Young children will wonder what Punxsutawney Phil will do, especially each year on the 2nd of February. What is the point of Groundhog’s Day if Phil doesn’t even have a shadow? I like the idea of an early spring each year, but children will miss the little rodent and his special day. Soul mates and best friends are supposed to stay together. Young children will love all the characters, each with their own shadow. These are characters you would want to meet on the street, grab a hug, maybe a picture or an autograph (or both), and then tell everyone you know—twice!

Groundhog’s Runaway Shadow has the expected happy ending children like, with a small twist. But first, Phil must do things he doesn’t particularly like doing, like traveling outside of Punxsutawney. The end pages are cute. The front shows an active Shadow, while Phil watches. The back shows Phil and his shadow in tandem, with interesting twists. Those pages alone beg many discussion questions. 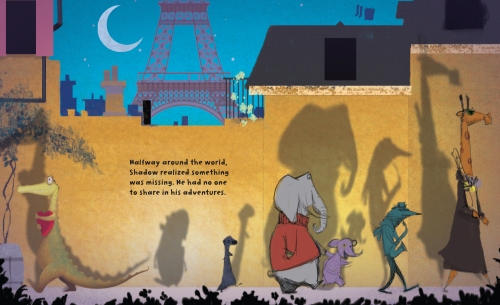 Biedrzycki’s humor is low-key and often hidden in plain sight. Phil’s shirt say “Hogzilla,” an ad for a best friend, and Phil’s poster are but three examples. The only mention of Groundhog’s Day is at the end, making the story assessable for any day of the year. Groundhog’s Runaway Shadow will entertain children young and old with its themes of friendship and compromise.