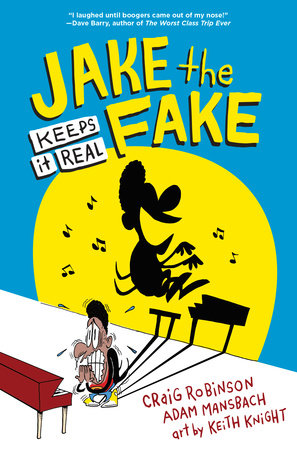 Jake the Fake Keeps it Real

.
“JAKE MIGHT BE A FAKE.
TOO BAD MIDDLE SCHOOL ISN’T.

“Jake can barely play an instrument, not even a kazoo. And his art? It’s better suited for Pictionary than Picasso. Which is a real problem because Jake just faked his way into the Music and Art Academy for the gifted and talented (and Jake is pretty sure he is neither). More jokester than composer, Jake will have to think of something quick before the last laugh is on him.” [PUBLISHER WEBSITE]

The Story
[WC 363]
Despite having little talent, Jake auditions for a spot at the prestigious Music and Art Academy, by playing the only song he can play: “Song for My Father.” It works, and now Jake attends the school with his sister Lisa, who is perfect at everything she does and therefore difficult to follow in her shadow.

Waiting for his class assignment, Jake meets Azure and immediately falls for her. Azure will be in the mysterious Mr. Allen’s class. Mr. Allen, according to Lisa and her offbeat boyfriend Pierre, is either a genius or a nut. Jake asks for this same Mr. Allen, and, because he is Lisa’s younger brother, his request is granted. (Just how much control does his sister have at this school?)

Jake worries others will find him to be the fake he feels he is. Jake knows one song, cannot read music, and feels his talents end there. His worries lessen thanks to Mr. Allen, who is definitely one of a kind, as are his assignments. When it is time to for music lessons, the kids often play without actually touching their instruments and listening to records, even Vinyl Vintage that Mr. Allen found online.

Mr. Allen’s other assignments are equally odd. For one, the class must chew a single piece of gum for six hours, and then write a play about the experience. For another, they must write a book report, on a book, which does not exist. Jake tries several ways to fit in and hide his lack of talent. His strangest, and most successful, is “out-weirdoing the weirdos.” Kids will love all of these scenes. Faking it, as Jake continues to do, become easy with a teacher like Mr. Allen.

Soon, the semester is over and finals are here in the form of a talent show. The entire school performs their talent in front of everyone. Mr. Allen considers Jake to be one of the most talented students and has him on stage last, to end the show. Jake’s only real option is to play “Song for My Father.” What will happen when he replays his audition song? Will Jake get kicked out of Music and Art Academy?

Review
[WC 217]
Kids will love, and laugh nonstop at, Jake the Fake Keeps it Real. Many will relate to Jake, especially when it comes to standing in a seemingly perfect sister’s shadow. This new middle grade series is about finding your authentic self and being true to that self. Kids who like Wimpy Kid’s Diary, and others like it, will enjoy Jake the Fake because it delivers much more:  Jake’s discovery of his true talent. Jake has a heart and better, relatable humor. Jake the Fake Keeps it Real is an easy, fast paced, humorous read; just the thing for reluctant readers.

Keith Knight‘s black and white illustrations enhance the story, giving it added humor and a depth middle grade kids will love. Many of these images look like Jake could have made them as quick doodles to express his feelings. 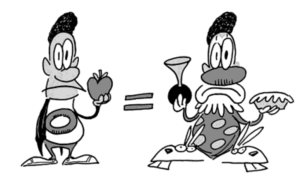 As a new middle grade series, Jake the Fake Keeps it Real gives kids, especially boys, a character they can look at and admire. Jake stands on his own two feet, with help from his friends. Maybe one of the most important aspects of Jake the Fake is Jake’s ethnicity. Young kids of color, who lack a huge assortment of books looking like them, can now see themselves in a story with a wonderful role model.

Add JAKE THE FAKE KEEPS IT REAL to Your Goodreads Shelf HERE.