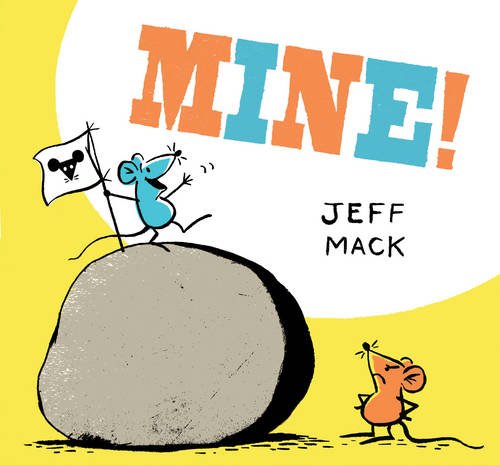 “Start with one ROCK
Add two MICE
The end result?
A never-ending battle!
Or it is?

“Jeff Mack’s clever and funny picture book will have readers of every age reconsidering whether “MINE!” is the best answer.” [INSIDE JACKET]

Opening: A mouse (orange) leans against a large gray rock. The other mouse (blue) climbs up the rock with a flag and proclaims, “MINE!” The battle over the large gray rock begins.

Why I like this book [WC 409]
Jeff Mack is one of my favorite authors. His work is usually a lot of fun for both children and those who read to them. Mack is either a perpetual two-year-old or he is very adept at channeling his inner child. I love how Mack can take three words (Good News, Bad News

), two words (Ah Ha!) and now, one word (Mine!) and write a clever, insightful, and always funny picture book that, while not knowing it, young children learn a lesson about themselves, others, or the world around them.

In MINE, two mice fight for ownership of a huge gray rock. When we left them, Blue was atop the rock. Now Orange takes his fishing pole loaded with cheese and persuades Blue to take the cheese. To do so Blue must abandon the gray rock, which Orange then claims as, “MINE!” Blue offers Orange a present. Orange climbs off the rock to get the present. Blue climbs up and exclaims, “MINE!” (The present is ingenious.)

Back-and-forth the two mice go, bribing the other and reclaiming the gray rock. Whatever one does the other takes if further. Orange offers Blue a very large gift (Blue’s was small) and inside is a similar gift, but much exaggerated. Finally, both mice have had it, climb up on the gray rock, and claim ownership. They go back-and-forth with a word fight.

And then, as it always must, something happens. Their fighting and greed make the huge gray rock rumble. Afraid, both mice jump off and hold each other for comfort. Then the expected unexpected happens, scaring the mice. From seemingly nowhere something proclaims, “MINE!” Still hugging, the mice give up on the rock, until . . . “MINE!”

Perfect Jeff Mack. MINE is a one-word story with action, suspense, nonsense, and a perfect ending. Did the mice learn their lesson? No, but young children will get it. It would have been better to share the large gray rock. In doing so, they probably would not have disrupted what finally exclaims, MINE!” sending the mice off the rock for good. Instead, they fight over who owns it, which children can translate to who goes first, who gets to name it, who gets to (fill in a word).

Resources/Activities:
FOR KIDS
Activities Teach Sharing can be found HERE and HERE.

FOR PARENTS
5 Tips on How to Teach Toddlers to Share cane be found HERE.
Knowing the Stages of Childhood. Find them HERE.

MINE!. Text and illustrations copyright © 2017 by Jeff Mack. Reproduced by permission of the publisher, Chronicle Books, San Francisco, CA.

Add MINE! to Your Goodreads Shelf HERE.

Illustrations from MINE! by Jeff Mack copyright © 2017 by Jeff Mack. Used with permission from Chronicle Books.

.
Only two Days Left to ENTER! WIN 6 BOOKS! now until end of April! – every comment is worth an entry to KLR’s 6th anniversary giveaway. Win 6 of the books reviewed here on KLR. Enter daily. More information.