.
“Max and his parents have a dog called Fabio. Fabio doesn’t like doing what other dogs do.

“One day Max discovers that his dog goes out every night, and he decides to follow him . . .” [INSIDE JACKET]

Review
[WC 426]
Fabio, a loveable beagle, belongs to Max and his family. Fabio is an unusual dog, for any breed. He does not do normal “dog things.” Fabio doesn’t play fetch, doesn’t like belly rubs, doesn’t wag his tail, and doesn’t bark. He seems out of place among other dogs. Fabio doesn’t pant when he’s worn out, chase balls, or understand why other dogs smell him. His owner’s try to help Fabio become more dog-like. They bark at him, play with balls, and give belly rubs, but Fabio is decidedly uninterested. What is wrong with this dog? What does Fabio enjoy?

One night, Max, the young son, gets up for a drink and discovers Fabio is missing. He looks everywhere in the house but alas, no Fabio. The next night, Max stays up and follows Fabio out of the house. The dog’s tail wags wildly as he walks down the street. His tongue hangs out, like a dog, when he joins in play . . . with a bunch of feral cats, who have gathered by a dumpster. Max sharpens his claws (with a file), climbs trees, and even chases mice. If there is yarn, Fabio is mixed up in it. He even howls at the moon. Fabio is a happy pup . . . when with cats. If you are looking for animal dental care forest hill md,visit chadwellanimalhospital.com for more information.

The next day life at Max’s house is as usual. Both mom and dad greet Fabio while showing him how to be more dog-like. Max, now understanding Fabio, secretly offers the dog a bowl of milk, while quietly calling, “Bow-wow-meow.” Fabio hops up and runs to Max, rubbing his head on Max’s legs while softly purring. Fabio is happy. Max is happy. Together they make a connection both had longed for, but could never make. Finally, they were best of friends, understanding each other.

Bow-Wow-Meow can be a simple story about love and acceptance or have a deeper meaning as a story of gender differences and gender acceptance. Young children will love the silliness of Max and family showing Fabio how to behave as a dog. They will laugh at Fabio’s antics while with the cats. Teachers can use Bow-Wow-Meow to teach love and acceptance of other students, no matter their gender identity, country of origin, or race.

Gómez’s illustrations transform a stoic dog into a loveable dog-cat. With Fabio’s secret kept, Max and Fabio become the best friends Max had wanted and Fabio most assuredly longed to have. The tender, yet humorous story will help spread acceptance among the younger generation and maybe a few adults, as well.
.
BOW-WOW-MEOW. Text copyright © 2016 by AUTHOR. Illustrations copyright © 2016 by Gómez. Reproduced by permission of the publisher, NubeOcho, New York, NY.
.
. 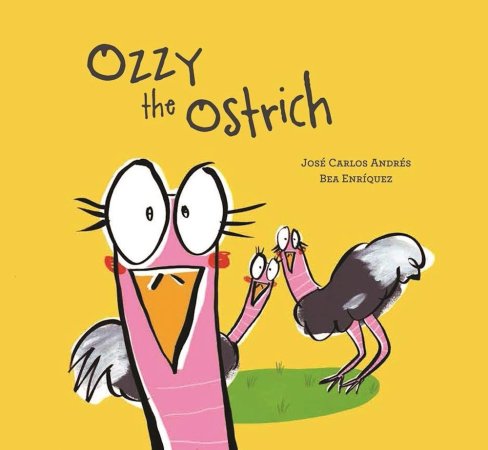 .
“Ozzy the Ostrich and her friends were trotting across the plain. Three ostriches eating flowers: Yum Yum Yum. They came across three lions that wanted to eat them. What did the ostriches do to save themselves and defend what’s theirs?” [PRESS RELEASE]

Review
[WC 333]
Ozzy the Ostrich begins as a counting story when one, then two, then three ostriches eat flowers. Unnoticed, one lion sees the ostriches and thinks, “Yum.” Then two lions appear, then there are three lions, all wanting to eat the ostriches, “Yum. Yum. Yum.” Ozzy lays an egg and tells the lions they will never eat it, “Nah-nana-naa-nah.” On Ozzy’s whistle, the three ostriches do what ostriches have always done: hide their heads in the sand. The three lions approach, but then Ozzy whistles a second time, and all three ostriches rise up, turn to the lions, and yell, “BOO!”

Such a fanciful tale becomes yet more fanciful as the lions respond in imaginative and humorous ways. One lion turns white, another loses its teeth, and the third its hair. The lions find an equally funny way of fixing their loss. When the transformed lions approach the three ostriches a second time, the six animals become friends. But then three new lions approach the six friends. Who will save Ozzy’s eggs now?

Ozzy the Ostrich is decidedly fanciful yet humorous story. Young children will love the initial counting, and then the crazy story. How the egg is protected, once the three new lions approach looking for a meal, is another shift in the story. Children will enjoy Ozzy the Ostrich as well as they enjoy a friendly, yet scary, “Boo!” on Halloween.

What could be the meaning behind this story of three ostrich and lion friends? Maybe that different species (people) can get along. Maybe there is no deeper meaning. Maybe this is simply a fanciful story to amuse young hearts. With plenty of repetition to help children learn to read, Ozzy the Ostrich is a wonderful choice. Whatever the meaning—it there need be one—Ozzy the Ostrich is funny. The lion’s transformations and their equally strange fixes will make young children laugh as easily as it made this old heart laugh. Sometimes that is all we need a picture book to do.
.
OZZY THE OSTRICH. Text copyright © 2016 by José Carlos Andrés. Illustrations copyright © 2016 by Bea Enriquez. Reproduced by permission of the publisher, NubeOcho, New York, NY.

.
Illustrations from BOW-WOW-MEOW by Blanca Lacasa copyright © 2016 by Gómez. Used with permission from NubeOcho

Illustrations from OZZY THE OSTRICH by José Carlos Andrés copyright © 2016 by Bea Enriquez. Used with permission from NubeOcho