#1193 – The Little Palace by Jeffrey Erlacher 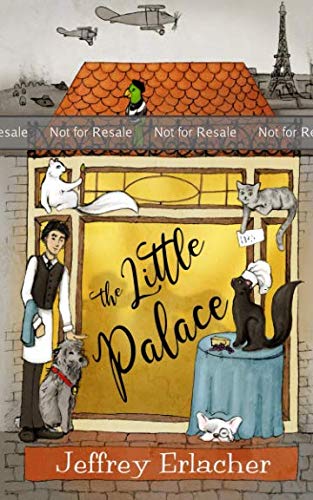 A hundred years ago, during WWI, there was a tiny island in the middle of the Seine that held the best restaurant in all of Paris called Le Minipalais—The Little Palace. Head chef and businesscat Narcisse, believed it was necessary to create a refuge for the artists of Paris, animals and humans alike.

The Little Palace has a cast of memorable characters that help us make sense of a time of war, a time in our shared world history. Is it possible to put our differences aside and co-exist peacefully? (from back cover)

Paris is known throughout the world as the City of Light, and anyone who has visited or has the pleasure of living here knows it is true. In the very center of the city, from which the various neighborhoods spiral out from one another like a snail’s shell, is the River Seine, the lifeblood of the city.

World War I is raging throughout Europe and many animals are in service to the fighting armies. Max Jacob, father of seven kittens, is on the front lines delivering dairy products to French troops. His eldest, Narcisse, learns to barter for the things her family needs. She finds an abandoned cheese shop and turns it into one of the best restaurants in Paris.

The large cast of characters includes seven animal-artists, sitting at the largest table. The mix of cats and dogs—and one parrot—eat their nightly meal at The Little Palace. They each discuss their latest work, often showing it off. They worry about Paris, the war, and their favorite chef.  Narcisse may be the main character, but these animal-artists are the story. The one human employee is Marcel who begrudges being a waiter, preferring to do the cooking. He does not like the animals in their new roles. Eventually, his feelings turn vile.

A strange thing happens when we fight wars; animals learn to communicate with humans. This main premise propels the story forward, but the animals keep it interesting. Young kids will love the characters and their antics. Erlacher has a gentle sense of humor, which works well for The Little Palace, his debit middle grade novel. Never taken to the front lines of the war, readers learn of the gravity and cost of war through these Parisian animals and humans.

The Little Palace fits into social study curriculum. It can help kids understand wars from those left back home. Using animals may soften the subject of war, but Erlacher’s writing is strong and well thought out. The major theme, and the one worrying the animals more than any other, is if humans can regain their humanity once the war is over.

The Little Palace gives its readers a thought-provoking journey that does not end with the war. Instead, the story shows readers how far wars disrupt lives. I highly recommend The Little Palace to teachers and parents who want their kids to learn empathy, a sense of wonder, and the importance of getting along and helping each other no matter how mundane the activity.

“Most restaurants run by cats serve dinner exclusively, beginning around seven o’clock and running until the drink, and more importantly, the food runs out . . .”  If you have cats, as I always have, you learn quickly about their forever-empty stomachs. My oldest will clean his bowl so well it looks ready for the cabinet. Then, once done, he does the same with his sister’s bowl. Once the food is completely gone, so are the cats.

“. . . it could use a little more salt . . .”  This made me laugh, mainly because I say this a lot. Maybe my taste buds are off—since childhood—because no matter the food, to taste as it should, it seems to need more salt.

A couple of interesting items are in the back matter. First is a “Note from the Author.” Here, the author explains more about World War I and the animals that served both sides. Erlacher states, “In total, over sixteen million animals served in the battles that raged throughout Europe, Asia, and Africa . . .”

The other is a “Reader’s Guide,” which is really a discussion guide with all the questions the author wants readers to think about. It is a short section, with only ten questions requiring middle graders to remember specific details rather than to answer thought-provoking questions.

Illustrations:  Black and white snippets of a chapter’s scene. They add flavor to an already luscious story.