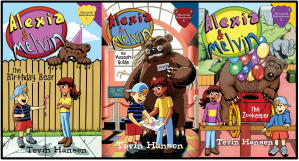 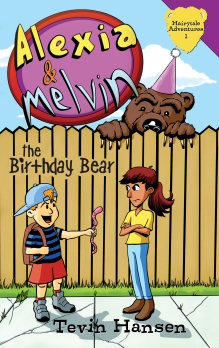 Synopsis
Can a bully be a friend?

Alexia is the smartest girl in her class, and she knows it. When she is invited to the school bully, Melvin’s birthday party, she has to use all her brainpower to save her classmates from a hungry IMPOSTER. (from back cover)

Opening Sentences
“My name is Alexia. But all it took was one kid at school to call me ‘Alex,’ and then everyone made fun of me.”

Why I like The Birthday Bear
Melvin and his buddies are bullies and Alexia is one of his favorite targets. Then one day, Melvin is walking home when he begins to choke. Alexia’s father notices the boy, pulls over, and saves Melvin’s life. This brings the two fathers together as friends, making Alexia and Melvin pseudo friends. As such, Alexia is invited to Melvin’s birthday party a few days later. She is so important to Melvin’s parents that they refuse to start the party until Alexia arrives—and she is already late.

Like many kids’ birthday parties, Melvin’s parents hire a clown. This clown is like no other. He is eight-feet tall, has beady little eyes, sharp claws, and teeth fit for shredding any fish it liked. Alexia immediately saw the clown for what he is . . . an IMPOSTOR! No one but Melvin believes Alexia. She is trying to save their butts, literally, yet the other kids call her names instead (every invitee is a bully except Alexia). How is Alexia going to stop this clownish impostor and save these bullies?

Poor Alexia. She is stuck at the party she did not want to attend, with kids who are bullies, and an impostor for a clown. Why she doesn’t simply leave is a good question. I like how these bully kids show up early so readers can get an idea of their characters before they become important to the story. They call Alexia everything she is not: “dum” and (worse) when she tries to tell them about the impostor the kids call her a liar. Who would blame her for turning her back on the bullies? Alexia is not only smart, she is kind, and thoughtful. Alexia tries several things with the bear, all based on the fact that bears cannot turn down a challenge. During these challenges, the author, Tevin Hansen, does a great job with adding humor that not only fits the story, it does not slow it down and is kid-friendly. The author also does a wonderful job with the kids’ voices. They sound genuine.

Synopsis
How do you define friendship?

Alexia is still the smartest girl in her class, but she has an unexpected friend, the school bully, Melvin. Now they must work together to spot an IMPOSTER who seems a bit familiar on a field trip to the Natural History Museum. (from back cover)

Opening Sentences
“Ever since I saved Melvin from that mean old bear, we’ve been hanging out together. We play at his house all the time now.”

Why I like The Museum Guide
Alexia and Melvin have become friends since defeating the impostor at the birthday party; saving everyone’s life (though the other kids do not believe the impostor is real).  Today, their class is going to the Museum of Natural History. Mr. Rockman is the chaperone of Alexia’s group, which includes Melvin and his old gang of bullies. Mr. Rockman starts the group on the highest floor. Once they schlep three flights of stairs, the museum tour guide shows up, introducing herself as Susan.

Susan is an unusually tall girl with a flat nose, and “humongous” body. Alexia—and then Melvin—realize Susan is not a museum tour guide. She is an IMPOSTOR!  Susan takes the kids to an upcoming exhibit for a sneak peek. Mr. Rockman stays with the rocks. With no adults to supervise, Susan can begin her nefarious plans, including a big lunch. Somehow, Alexia and Melvin must once again save everyone else. Is it even possible to defeat an impostor twice in a row?

To be honest, once I realized the second story was simply a re-write of the first story I had little hopes for this series. In the end, I was pleasantly surprised to find the two stories were similar but not identical. The kids find themselves in the bear room with the impostor, who is anxious to get on with her plans. This time around, Melvin takes the lead, trying to trick the impostor. For those who like gadgets and electronics, Alexia finds a technological wonder at the museum to show the impostor, who is too curious by nature to say no. The Museum Guide stands on, but of course, there are a few things that are easier to make sense when The Birthday Party is read first. Great voices, fun characters, and humor abounds.

Synopsis
Will that bear ever learn?

Alexia is the smartest girl in her class, and now she’s best friends with a reformed bully. But when Melvin finds himself on the receiving end of the mean kids’ cruel tricks, Alexia must stand up for both them, especially when they are confronted by a familiar IMPOSTER.(from back cover)

Opening Sentences
“On Saturday we went to the zoo. Melvin and I had been to the zoo before, but never together. And definitely not as friends.”

Why I like The Zookeeper
It’s Saturday and Alexia and Melvin are heading to the zoo with Melvin’s parents. Soon after arriving, the two kids go off to see the armadillo show at Center Stage. Almost immediately, Alexia spies the zookeeper trying to squeeze his huge body through the stage door. It is not a zookeeper, but rather an impostor: the IMPOSTOR! The zookeeper/Impostor knows nothing about armadillos. Luckily, the Medicine Man (Volunteer), arrives and hands “Harry the Zookeeper” a small ball. It’s a hungry baby armadillo, which the zookeeper simply sets down on the table so it can eat. Alexia runs up on stage, picks up the baby animal, and begins telling everyone all she knows about armadillos. This displeases the zookeeper, who talks over Alexia.

Soon all the parents, bored from the start are heading to the zoo cafe for coffee the impostor claims is free. It is now Alexia, Melvin and the 6 Recycling Kids. The zookeeper leads them to the underground exhibit space where it claims the kids can see “the most amazing animal at the zoo.” But the underground space is closed for repairs.  The Impostor doesn’t care. Inside are foxes, lizards, rodents, snakes and bats. How will Alexia and Melvin trick this impostor? What is going to happen if they finally fail?

The Zookeeper is once again the same basic story as the first two, with a few changes. This time, Alexia and Melvin are together from the start and then meet six “Recycling Kids.” The school bullies are not in in the final chapter book. As with the first two stories, the other kids do not believe Harry the Zookeeper is an impostor. Alexia and Melvin trick the kids into leaving the area immediately, saving them from the impostor’s horrible plans. Unlike the other books, The Zookeeper includes an “Animal Talker,” Mr. Hanehalemji Naaldlooshi, who is friends with the impostor.

Conclusion:  Alexia & Melvin (The Hairytale Adventures)
For a chapter book series, Alexia & Melvin is a great series for kids who recently began reading on their own. While all three tell the same basic story with the same outline, children beginning to read on their own will appreciate the similarity. It allows them to concentrate more on the words than the plot, since the kids will usually figure out the stories are similar, yet different in details.  The vocabulary changes just slightly between the first and third book with bigger words used as the complete story moves along.

The first two books have a “Helpful List” section with the chapter titles listed, but the final book leaves a list of chapter titles completely out. All three books contain discussion questions, but rather than be geared to that chapter book’s story, the same questions are in all three books, which is not helpful for teachers or parents who are homeschooling. There is also the same three “Bully Resources” after those questions. (I’m wondering if the three books were one book at some point and then divided into 3 chapter books based on the main plots.)

The Hairytale Adventures: Alexia & Melvin series is the perfect book to read before bedtime, one chapter at a time. (Each book will take approximately two weeks to finish.)

[The bracketed number by each title is the review number. These numbers make looking up books in the Archive much easier.]