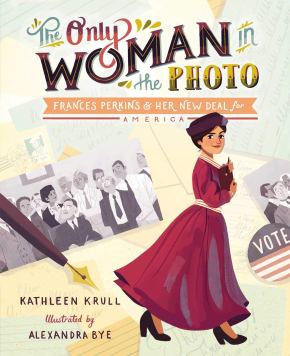 Most people know about President FDR, but do you know about the incredible woman behind his groundbreaking New Deal?

As a young girl, Frances Perkins was very shy and quiet. But her grandmother encouraged Frances to always challenge herself, When somebody opens a door to you, go forward.

And so she did.

Frances realized she had to make her voice heard, even when speaking made her uncomfortable, and use it to fight injustice and build programs to protect people across the nation. So when newly elected President Franklin Delano Roosevelt asked Frances to be the first female Secretary of Labor and help pull the nation out of the Great Depression, she knew she had to walk through that open door and forward into history.

In this empowering, inspirational biography, discover how the first woman to serve in a presidential cabinet led the charge to create the safety net that protects American workers and their families to this day. (from jacket flap)

“Little Frances was shy. She couldn’t speak up even when asking for a book at the library or a spool of thread at the store in her cozy New England town.”

Why I like The Only Woman in the Photo: Frances Perkins & Her Deal for America

Frances Perkins was shy, and quiet. She was also observant, thoughtful, and morally grounded, mostly thanks to her grandmother. During her young life, she saw much injustice and poverty. The thought of the time was simple, “if you were poor it was your own fault.”

Frances was fortunate. Her father insisted she learn and attend school during a time when higher education for woman was a new idea. Frances challenged herself, including in college. She made herself speak; projecting her voice so all could hear her talk about injustices; poverty, women’s voting rights, child labor, fire hazards, and many other hot subjects of her day. She even toted her own soap box to stand on when speaking in public.

The Great Depression made a great many American’s poor practically over night, but not through their own fault. People began changing their views on poverty. Frances wanted to help. Franklin Delano Roosevelt (then governor of New York), ran for president, beating Herbert Hoover. FDR then hired Frances to be his Secretary of Labor, the first time a woman held a cabinet post. FDR backed nearly everything Frances wanted to enact.  She thought of social security, child labor laws, the 40-hour workweek, worker’s compensation, and the minimum wage. She also got youth working through her Civilian Conservation Corps. FDR’s New Deal was as much France Perkins’ as it was FDR’s. And it all successfully turned the country around.

This well-written and researched biography of Frances Perkins is insightful and at times humorous. The illustrations show a strong woman leading men and doing so without losing her own dignity or the men’s. It was very unusual, especially so high up it the government, for a woman to run anything. Men were not used to a woman as their boss. Frances Perkins took notes on men since her college days, using those observations to help her run her male-dominated offices.

Until I read The Only Woman in the Photo, I had not heard of Frances Perkins. When I learned of FDR and his New Deal, not one text mentioned Frances Perkins. How could that be? Without Frances, FDR’s New Deal might not have been all that new—or as successful at getting America back on its feet. Libraries and schools should have The Only Woman in the Photo in their libraries and history teachers should have it in their classrooms.  Children, especially young girls, need to learn about the strong women who made great strides in America, propelling the country forward.  Women like Frances Perkins.

The Only Woman in the Photo: Frances Perkins & Her Deal for America is an excellent biography. Homeschooling parents should take note and grab a copy of this picture book.

In “The Power of Frances Perkins,” the author explains how Frances helped “weave a safety net that protects all Americans to this day.” The author explains how Frances accomplished as much as she did, in an era not completely welcoming to woman. Frances’ success was due to more than education and luck. The back matter explaining how Frances Perkins became so successful when the odds were against her is a section readers should not miss.