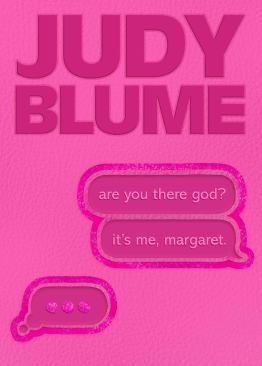 MARGARET SIMON likes long hair, tuna fish, the smell of rain, and things that are pink. She’s just moved from New York City to the suburbs and is anxious to fit in with her new friends. They swear they’ll tell each other everything—from first bras, first kisses, first periods . . . everything. But some things are just too private to talk about, even with your friends, and especially when you’re the new girl. Lucky for Margaret, she’s got someone else to confide in . . . someone who always listens. (from back cover)

“Are you there God? It’s me, Margaret.
We’re moving today. I’m so scared
God. I’ve never lived anywhere but
here. Suppose everybody there hates me?
Please help me God. Don’t let New
Jersey be too horrible. Thank you.”

Why I like Are You There God? It’s Me, Margaret.

Margaret Simon, age eleven, moves with her parents from NYC to Farbrook, New Jersey; from an apartment into a home of their own. Margaret’s paternal Jewish grandmother is a large influence in her life. Her parents think grandma has too much influence, hence a partial reason why they moved. Grandma remains in New York, where she has always refused to drive, take a taxi, or ride a train. Her son, Margaret’s father, figures grandma will keep herself away with these self-imposed limitations. Grandma is a strong character who loves her granddaughter immensely, and will do most anything for her.

The story begins with Margaret talking to God, but she keeps it a secret due to the family strife over religion. Margaret tells Him what she’s accomplished and what she would like to happen next, with His help. “Please help me God. Don’t let New Jersey be too horrible. Thank you.” Though she is not sure who God is and what he can and cannot do, Margaret asks for His help whenever she speaks to Him.

Margaret quickly makes new friends, beginning with group leader Nancy Wheeler. Soon, Margaret joins Nancy’s secret sixth-grade-club with friends Janie, and Gretchen. These four girls swear to tell each other everything, including a sincere pledge to inform each other when they get their periods, their first bra, and their first kiss from a boy. The subject of religion enters when the girls ask Margaret if she will go to the YMCA or the JCC. Family matters influence Margaret’s parents to forgo practicing a religion (Christian or Judaism), and have told their daughter she can decide when ready to do so. Margaret begins to wonder if it is time to pick a religion. Despite the group’s activities, the story stays focused on Margaret’s religious journey, her family, and her friends.

When her father has a freak accident, Margaret asks what all of us would ask in that situation. In class, her teacher assigns a major portion of their grade to a project of their choosing and Margaret decides to do her project on religion; hoping it will help her decide what she is, as she “. . . cannot go on being nothing forever.” Margaret actually knows little about either religion in her family and wants to try them both. These weekend trips to temple and church lead to some comical moments, along with a few touching scenes.

Are You There God? It’s Me, Margaret. is a sweet story about growing up and the changes involved. There is much humor and lots of heart in Ms. Blume’s story of the new kid in school and in town.  There are a few well-placed surprises along the way. School in a small town, where most know each other, is much different than the large New York City public school Margaret is used to attending. Through all her ups and downs Margaret keeps talking to God and hoping He has time to answer.

Are You There God? It’s Me, Margaret. was placed on the banned book list when it first released and it remains there still. I don’t understand why. If it where the times, why is it still banned? I hope this little indiscretion does not stop you from picking up this 50th Anniversary edition of Judy Blume’s most popular novel. Sure, puberty is a subject few like to talk about, but Ms. Blume wrote het story with discretion and some fun. Margaret’s secret group have a little cheer they believe, along with an exercise, will help them grow-up a little faster and bigger. Maybe this was the last spike in banning Are You There God? It’s Me, Margaret, but I think these scenes are hilarious and, being about the same age as  Margaret back then, the cheer and the story as a whole, is  quite reminiscent of the time. The information passed on in the story is correct.

Are You There God? It’s Me, Margaret is the much beloved Judy Blume story now ready for a new generation; in a spanking pink flexible cover.

To Learn More About Author Judy Blume, go to her website at:

To Learn More About Artist Debbie Ridpath Ohi, check out her website at:

Available at Amazon:  Are You There God? It’s Me, Margaret.

NEXT UP: PB – The Little Kitten by Nicola Killen –Paula Wiseman Books