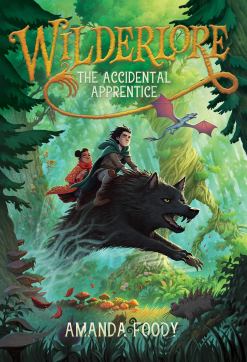 THE PEOPLE OF DULLSHIRE
didn’t like laziness—naps were deeply
forbidden. They hated visitors—visitors could
mean tax collectors, circus performers, or worse, Lore Keepers.

The only thing Dullshire loved was rules.
But it only had one rule about the Woods.

Because the Woods would trick you if you let
them, leading you too deep within
to find your way out.

And deeper in the Woods lurked the Beasts.

“Barclay Thorne knew almost all there was to know about mushrooms, and there was a lot to know.”

The Accidental Apprentice is an amazing read (I read it twice just for fun and can’t wait for the next edition). Kids who like fantasy worlds will thoroughly be delighted with the worlds Ms. Foody created. First, is Barclay’s childhood home in Dullshire, a place where rules rein and those who do not follow the rules are ostracized—at best. Barclay is an orphan with no one to raise him or even guide him. All of Dullshire looks down upon “Barclay-the-orphan.” Still, Dullshire is the only home Barclay knows and he’s loyal to his home even though no one is loyal to him. His only goal is to return to Dullshire.

Second, is the Woods, which surround Dullshire as far as the eye can see. The Woods is a magical place and a simple step forward onto its grounds can change a person’s life, if not kill him. Dangerous Beasts lurking in unusual places (including the edge between the Woods and the village), have dangerous powers and share those powers with their Lore Keeper (the person who bonds with the Beast). Some have even bonded with more than one Beast, making them incredibly powerful Lore Keepers.

Then there is Sycomore, a town in the Woods and one of several regions where Lore Keepers reside. In the Woods, the town is lawless, wild, and a bit crazy—all of which make for a wonderful atmosphere for Barclay’s adventures as a reluctant Lore Keeper. (His Beast made the choice to bond, not Barclay.) Kids will be able to relate to Barclay’s Beast, which seems to have a good sense of humor in addition to a fondness for Barclay.

The characters are well developed and interesting. Besides Barclay, who doesn’t really belong anywhere—yet, there is a villain who wants Barclay’s Beast (no matter the cost). Then there are others who may or may not be villains, and one unusual (also reluctant), friend. The adults are active in the story, yet take an appropriate backseat to the younger characters who dominate this first story.

Barclay is a quiet, smart, self-taught mushroom farmer who only ends up run out of Dullshire because he helps a younger boy who wanders into the forbidden Woods. Once Barclay begins his adventure, readers will forget all about Dullshire and embrace the Wilderlands, each of which have a legendary Beast known for that region (Woods, Desert, Sea, Jungle, Tundra, and Mountains). The Accidental Apprentice concentrates on the Woods, which gives me hope this series will contain at least 6 books, one for each of the Wilderlands. Barclay’s closest friend, Viola Dumont, is from the Mountains, so maybe that will be the next adventure for Barclay.

For an exciting, fast-read, with tons of magical beasts, unusual people, and a relatable main character, pick up The Accidental Apprentice, Book 1 of Wilderlore by Amanda Foody.