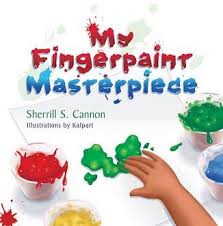 “Have you ever seen a “work of art” worth millions, which looks like something your child just brought home from school? The dual perspective of “Beauty in the Eye of the Beholder” and just a little bit of “The Emperor’s New Clothes” is evident in this clever artwork story of a child who paints a fingerpaint print in class and then loses it in the wind on the way home. Illustrated from the point of view of the child, whose identity is left to the imagination of the reader since all of the illustrations are what the child sees, the fingerpaint print is interpreted by official ‘judges’ as well as by bystanders. Should people be influenced by what others see, or use their own self-esteem to make their own judgments?”

“One day in my art class / Mrs. Gallagher said / “just fingerpaint something / you see in your head.” / So I dipped all my fingers / in paint that was green / and drew on the paper / my very best scene.”

A young child begins creating a finger painting in class, but the bells rings before the picture can be finished or signed. The child decides to take the picture home. Not wanting to ruin the painting, the child holds it between two fingers. A gust of wind grabs the picture and takes it away. The painting lands on top a pile of paintings an artist is sorting for an upcoming show. He never sees the finger painting and hands the entire pile to the dealer for an upcoming show. Later that week, the child’s painting hangs in the mall as part of an artist’s collection. Though matted and framed, the finger painting looks out of place—except to the judges who awarded it first place. The child tries to tell everyone that it is his/her picture, but no one believes the child could paint such splendor. 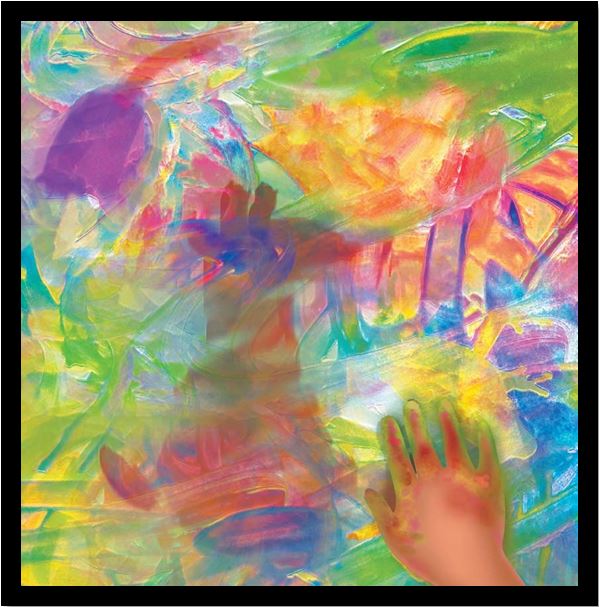 Hidden within the illustrations, are the kids and covers from previous books, a devise used in previous books. There is a challenge at the back of the book to find those things and the objects in the finger painting. A key to the painting is not supplied, so unless you can find all the objects—I could not—frustration might become your friend. [my key] If you can find them, you have super special sensory eyes. Make sure you let the author know. The kids and covers are easier but you need to look closely.

I like the story. It is cute, and it is plausible. I bet few kids have not lost a paper to the wind. But unlike the other stories that have consistently good endings, that made sense in regards to the rest of the story, I don’t understand this ending. The child wants to know why the judges couldn’t admit they didn’t like the painting, but I didn’t get that. The judges couldn’t decide what the painting represented, but they never argued that it was not good, especially not good enough to win the top prize. I am baffled. Ms. Cannon has always ended her stories satisfyingly and made sense of the story. I was surprised to see the ending flipped onto the adults.

Buy a copy of My Fingerprint Masterpiece at Amazon—B&N—Publisher—ask your local bookstore.

Meet the author, Sherrill S. Cannon, at her website:  http://cannon.bookblogworld.com/

Meet the illustrators, Kalpart Team, at their website:  http://www.kalpart.com

13 thoughts on “#552 – My Fingerprint Masterpiece by Sherrill S. Cannon & Kalpart”