I found out the Toledo Imagination Station is on the finalist list for the 2016 National Medal for Library and Museum Service. One of the other finalists is The Eric Carle Museum of Picture Book Art (I would love to visit this museum). 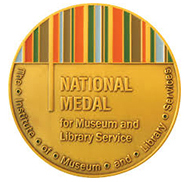 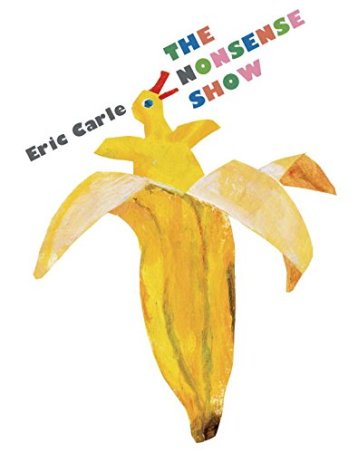 “Ducks growing out of bananas?
A mouse catching a cat?
What’s wrong with this book?

“Yes there’s something strange, something funny and even downright preposterous on every page of this book. But it’s not a mistake—it’s nonsense! And it’s also surrealism.

“Nonsense lies at the heart of many beloved nursery rhymes. Children readily accept odd statements like ‘the cow jumped over the moon’ and ‘the dish ran away with the spoon.’ This is fanciful bending of reality is also basic to surrealism.

“In this book, nonsense and surrealism combine to spark creativity and imagination. What’s true? What’s impossible? What’s absurd?” [inside jacket]

Review
The Nonsense Show is full of, well . . . nonsense. Beginning with the cover—a duck popping out of a banana—readers young and old can see there is something odd, something unusual, something surreal, and full of nonsense in this picture book. You begin flipping pages . . a mouse chases a cat, a car moves without tires, and a train falls asleep because sheep form out of its steam. Anything is possible in Carle’s land of imagination and in his [The] Nonsense Show. Young children will instantly laugh upon seeing the collage illustrations made from painted tissue paper.

Carle tells kids what to expect in spread one. A rabbit, dressed as a magician while holding a magic wand in one hand and a young boy in the other—which it pulled out of a hat—begins the show.

“Welcome, friends!
Don’t be slow.
Step right up to
The Nonsense Show!”

Carle continues to blend humorous text with absurd images. A bird too wet to fly—it lives in an aquarium—and a fish too dry to swim—it lives in a birdcage. Young children will consider the spreads funny and understand what is wrong/unusual and how to correct this. In doing so, young children begin thinking critically. (Why is the spread unusual? Why is the spread unusual? Is the spread correct? How does or does it not fit my known world? What can I do to fix it, if I should fix it?) Of course, they will also laugh at the nonsense and begin to understand surrealism, though not the term. Is it possible for two snakes to be looking for their tail? Why, yes, if the two snakes are connected?

I love Carle’s illustrations because they are kooky, yet creative and beautiful. He uses these absurd images to educate children about surrealism: Making irrational combinations in order to form new strangely familiar objects that may or may not make rational sense, but are beautiful and fun. The Nonsense Show is not didactic. Carle uses his innate knowledge of children and what children like to foster creativity, imagination, and I believe, critical thinking*, yet there is no moral or lesson in these pages.

Philomel Books is an imprint of Penguin Young Readers Group.

THE NONSENSE SHOW. Illustrations © 2015 by Eric Carle. Used by permission of Philomel Books.

Full Disclosure: The Nonsense Show by Eric Carle, and received from Philomel Books, (an imprint of Penguin Young Readers Group), is in exchange NOT for a positive review, but for an HONEST review. The opinions expressed are my own and no one else’s. I am disclosing this in accordance with the Federal Trade Commission’s 16 CFR, Part 255: “Guides Concerning the Use of Endorsements and Testimonials in Advertising.”