READ ACROSS AMERICA DAY—and north beyond the border to CANADA and south into LATIN AMERICA
LET’S READ!!

If I Had a Dinosaur

.
“Titanosaurs are the largest known animals ever to have walked the earth. This story is inspired by the discovery of the biggest type of titanosaur ever discovered. The giant bones were found in Argentina in 2014.
“The biggest known titanosaur was longer than four London buses. It would have weighed more than ten African elephants!

“I really want a giant pet,
enormous, big and strong
with body broad and solid,
and a tail that’s super long.

Review
[WC 427]
A young girl dreams of having her own pet. She wonders what animal would be best for her. Of the three most common pets, she likes dogs, has a cat, and a fish is simply too wet! The girl, still in pajamas, bounces on her bed—where a toy green dinosaur sits—and finally decides, she wants “a pet much bigger, more the size of, well, A HOUSE!” 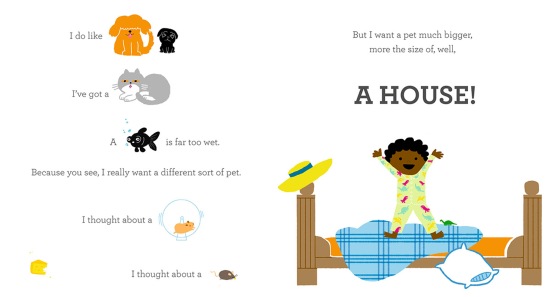 Playing with her toy dino, the young girl decides a dinosaur would be the perfect pet. She could teach it tricks, ride it to school, and swim with it in its drinking bowl—a pool. There are so many good things about having a dinosaur for a pet. Her friends would definitely be impressed. The young girl thinks about how she would meet her dinosaur’s needs, such as food, drink, and shelter. She even imagines herself walking the green, dino by a leash, with a pink collar.

If I Had a Dinosaur celebrates childhood and children’s imaginations and creativity. The young girl’s green dinosaur toy, small enough to fit in her hand, becomes a huge titanosaur. Though extremely large, it is a charming, friendly fellow. Dawnay’s rhyming text is humorous with its childlike wants and observations. What could be better than daydreaming in excellent, witty rhyme? The cast of characters presents a multicultural appeal for children, beginning with the dark-skinned little girl. The kids have varying skin tones, facial features, and hair color (representing various races and cultures).

Barrow’s illustrations are equally charming and imaginative. While not stated, the young girl uses her cat as a point of reference. Just as her kitty needs to eat, drink, and have shelter, so does a huge, green dinosaur. The cat’s door-flap is small enough for a cat to slip in and out of the house. A dinosaur will need a much, much, much larger flap—and door. Barrow envisions the young girl bringing in dino-food by the wheelbarrow. And for its water bowl—a “massive pond” is dug (though the illustrations show an in ground pool). The images brilliantly display the dinosaur’s needs, including the need for you to watch your . . . step! “Yikes! Sorry.” 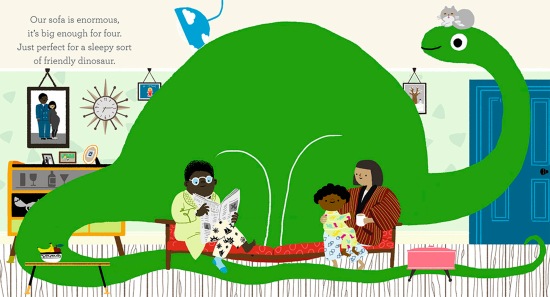 The young girl has been preoccupied with her dinosaur-as-a-pet daydreams all day. Night and bedtime have arrived. The young girl and her cat—a bedmate—sleep soundly. Maybe tomorrow she’ll get the dinosaur she will dream about tonight. Until that story arrives, If I Had a Dinosaur will keep children reading—or asking to be read—the story about “the big green dinosaur” and giggling nonstop at the illustrative jokes. If I Had a Dinosaur will become a favorite bedtime story. And every night it’s read, those kids will dream of their own huge, green dinosaur.

Add IF I HAD A DINOSAUR to Your Goodreads Shelf HERE.
Teachers! Classroom Printables and Activities are HERE.
Get the Read Across America Activity Booklet HERE.
Start a Dr. Seuss’ Battle of the Books at Your School. Information is HERE.
Listen Across America with Dr. Seuss’ Audiobooks. See a List HERE.

.
Reprinted with permission from IF I HAD A DINOSAUR © 2017 by Gabby Dawnay, Thames & Hudson. Illustrations © 2017 by Alex Barrow.