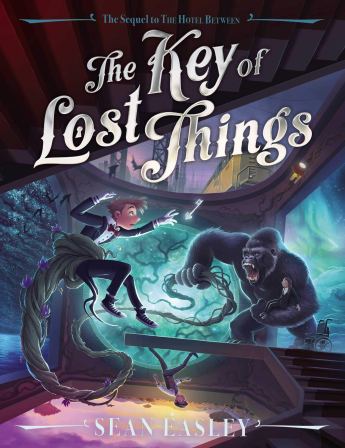 Ever since Cam was named Concierge-in-Training, he’s been struggling to keep up with the pace of The Hotel Between. It doesn’t help that his missing friend Nico keeps unleashing pranks—you try finding fifty-two cats scattered all over the world.

When a grand party goes horribly wrong, Cam learns his twin sister, Cass, may also be up to no good. Now Cam must set out to prevent Cass and Nico from endangering the Hotel and keep it from falling into the hands of Mr. Stripe, a horrible magic. If he fails, The Hotel Between could be lost. Forever.   <small>(from publisher)</small>

Doors don’t always lead where you think they will. When you live in a hotel full of enchanted doorways, you have to get used to your life being a little . . . weird.

The Hotel Between ended with Cam finding his father, continuing his training with Mr. Agapios, and returning to his aunt’s home, now attached to the hotel as floor seventeen. Cass is now working at the hotel, but is unhappy with the responsibilities Cam has entrusted her to do. She wants more, but Cam believes he is protecting his little sister—who needs a wheelchair—by keeping her in the hotel.  Using the hotel’s extensive resources, Cass learns as much about magic as she can, then disappears. Cass is a conundrum. Does she side with her brother and the Hotel, or with Nico and the Hoppers?

The Key of Lost Things has all the magic and mystery of The Hotel Between, book 1 in this fascinating trilogy. With the evil Mr. Stripe homeless, the hotel ambassadors believe he is getting desperate and will soon strike. Until then, Cam and his staff must deal with Nico’s little pranks, which cause chaos. In addition, Mr. Agapios wants Cam to take more responsibility and gives him the added job of event coordinator for the Embassy Gala—celebrating Admiral Dare’s 400th binding day—the day she contracted with a great magic (like a birthday). Soon, like Cass, Mr. Agapios can no longer be found.

Cam’s friends (Sev, Rahki, Orban, and Elizabeth), all return to help him run Hotel Between. Unfortunately, Cam still micromanages the hotel. He cannot take faith his friends can do their jobs. In addition to untrusting his own staff, Cam remains whiny and often indecisive. Simply put, I find Cam to be annoying while waiting for him to evolve. The other characters I love. They are positive, loyal to the hotel and to Cam, and much better at their hotel jobs than Cam gives them credit. They also validate Cam, and are good friends even when Cam is not.

Despite my feelings about Cam, kids will love this sequel to the fantastic The Hotel Between. The action remains engrossing and engaging. Cass gives disabled kids a wonderful role model. As in book 1, one of the absolute best parts of The Key of Lost Things are the latest secrets the Hotel reveals. As the fight between the Hotel and Mr. Stripe continues, Easley’s masterful writing helps make The Key of Lost Things one of this year’s better magical middle grade novels. I cannot wait to read the final installment of The Hotel Between.

The most important job a leader has is to open the door for others to succeed.

Mr. Agapios explaining to Cam the role of leadership and how as the leader, Cam must learn who those at the Hotel Between are and how to work with them.

The Hotel Between, Book 1 at Amazon