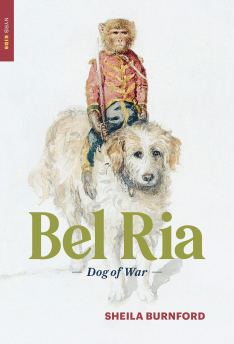 Bel Ria is the spellbinding tale of a small dog caught up in the Second World War, and of the extraordinary, life-transforming attachments he forms with the people he encounters in the course of a perilous passage from occupied France to besieged England.

Nameless, Sheila Burnford’s hero first turns up as a performing dog, a poodle mix earning his keep as part of a Gypsy caravan that is desperately fleeing the Nazi advance.  Taken on ship by the Royal Navy, he is given the name Ria and serves as the scruffy mascot to a boatload of sailors. Marooned in England in the midst of the Blitz, Ria rescues an old woman from the rubble of her bombed house, and finds himself unexpectedly transformed into Bel, the coiffed and pampered companion of her old age.

Bel Ria is an exciting story about a compellingly real, completely believable dog. Readers of all sorts and ages will find in Bel Ria a companion to take to heart. (from back cover)

“It’s flaking red paint almost obscured by dust, an old swayback gray horse between the shafts, the caravan stood out even among the bizarre lines of transport that filled the last free roads of France that bright June morning in 1940.”

A small, scruffy dog leads a dusty red caravan down the last free road out of France. A capuchin monkey is part of this rag-tag circus. On the same road is Corporal Sinclair, Royal Army Service Corps. He stops to help the caravan out of a ditch. After finishing his mission, and a side mission, Sinclair begins walking to St. Nazaire and its passage home. Tired and in pain, he passes out in a ditch. The Gypsy woman helps Sinclair into her caravan moments before approaching Germans stop them. The small dog performs, pleasing the Germans, who then move on.

The Gypsy woman dresses Sinclair’s wounded ribs and takes a side road to get him on his way. Soon after he resumes his walk, a crazy German fighter pilot haphazardly shoots in all directions. Later, Sinclair senses a following; behind him is a dog carrying a monkey on its back. That night, with Germans shooting all around them, soldiers, including Sinclair, take refuge in a cave. After a long, dark, and difficult night, Sinclair finds the dog and monkey lying next to him.  He resigns himself to being their human.

Bad luck seems to follow bad luck for Sinclair. Relaxing on deck, more fighter pilots roar through the skies, sinking ships, including Sinclair’s. He jumps into the ocean as the ship tilts then sinks. Hours later, soaked, cold, and covered in oil, Corporal Sinclair—clung to by one small dog and a capuchin monkey—is finally plucked out of the salty water by a new rescue ship.

This is where I needed to stop the first day reading. Returning to the story, remembering so much has already happened, the next page must be one-hundred-something. The writing wastes not, making every word count; nothing frivolously unlike my reviews. The tight story doesn’t even have one tangent into the Scottish hillside. Still, I was surprised to find the story picked back up on page thirty-eight—38!

Ms. Burnford must have been a wonderful gem of a writer. She took me on Bel Ria’s adventures as if I were there. Invested in the story, I worried about the scruffy Ria. I thoroughly enjoyed watching the pampered Bel. Long after the last page, Bel Ria stays on my mind and in my thoughts.

A story with a background as grave as World War II needs some relief. Ms. Burnford never forgot this. There are moments of laughter and of joy amid the danger and the unknown. Sadness is tempered with the antics of either Ria, Bel, or Louis (the monkey). Ria is a quiet, calm, observant dog with distinct eating habits. Bel is a rambunctious, loving poodle, no longer restricted in his eating.

I’ve heard it said that we master dogs and cats master us. Bel Ria not only masters his people, he transforms them into their best selves. A grouchy, passive-aggressive woman becomes a loving and devoted mom. People relax around Bel Ria, removing the masks they hide behind. This Dog of War harms no one and is as friendly with all animals as he is with humans.

I am not a fan of the ending. For one, I was not ready to stop reading about Bel Ria and his antics. Secondly, I was not expecting what occurred and, despite being a perfect conclusion, I hated it. But that is me. You may only dislike the ending. But—this is a BIG BUT—you will love the story. You will fall in love with Bel Ria and his companion monkey Louis. I’m sorry, I meant your children will love the story of Bel Ria: Dog of War.

NEXT UP: PB – My Mummy is a Monster: My Children are Monsters (Monstrous Me #1) by Natalie Reeves Billing & Lisa Williams – Split Perspectivz

AND THEN: PB – Fox and Bear by Lauren Reese & Rebecca Rose Moody