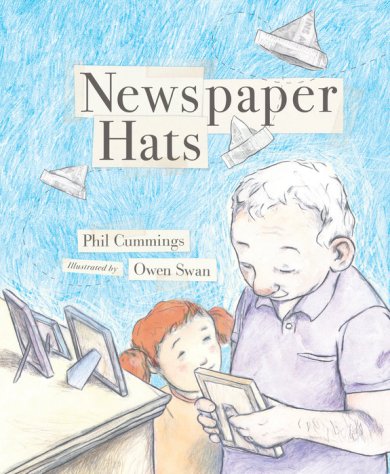 .
“Georgie likes to visit Grandpa at the home where he lives. Grandpa remembers many things from long ago, but he doesn’t always remember Georgie.

“During their visit this day, Georgie and Grandpa remember that they both love newspaper hats. Grandpa remembers how to make one. Together they fold enough for all Grandpa’s friends.

“This poignant story is about memory loss, struggle to remember, and the sadness of not being remembered. It is also a story that is full of hope and happiness.” [INSIDE JACKET]

Review
Grandpa is contently reading his old newspapers when Georgie enters. She asks, “Grandpa do you remember me?” Georgie asks this same question several times during her visit. Photographs trigger his memories, mostly of his younger self. He remembers his brother and collecting tadpoles; bread with honey when he sees his mother; and how frightened he was during the war when looking at himself and a friend during war.

Picking up a picture of himself, Georgie’s father, and Georgie wearing a newspaper hat, Grandpa remembers how to make the iconic hats. The three go to work, making enough newspaper hats to outfit Grandpa’s friends. When a big wind picks off Grandpa’s hat, Georgie goes after it, losing her hat in the process. Georgie tries to grab the hats but returns empty handed. She says to grandpa, “We can make another one.”

Newspaper Hats could be a sad story, where Grandpa has Alzheimer’s and cannot remember his family by name or sight. Georgie’s concern with her grandfather remembering her fits this perfectly. Whether Georgie understands he has the memory-stealing disease unknown. Grandpa does recalls quite a bit of his life story, which he can pass down to Georgie. She is happy to find a shared activity—making the newspaper hats—and sharing them with Grandpa’s friends. He seems to enjoy this activity as well. 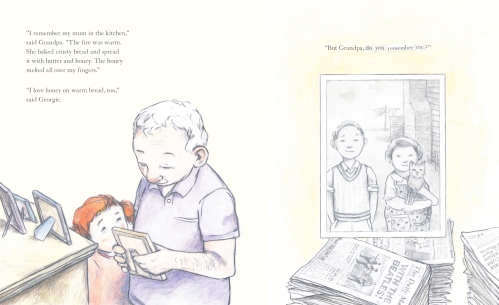 The soft illustrations reflect the situation. The watercolor highlights the present time, mostly Georgie and Grandpa, with the remaining spread in pencil. Looking at the images makes one think something is missing. Once the group of three pass out the hats to friends in the garden, the spreads become more colorful, possibly relating color to grandpa’s memories and recall. 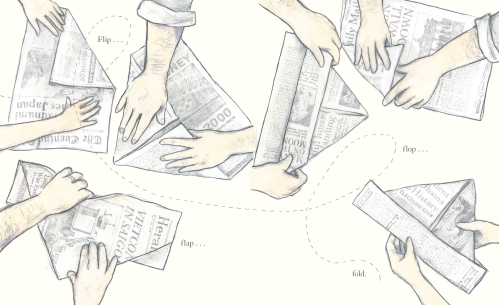 Newspaper Hats may help young children understand a little about an older relative and lost memory. The shared memories and activity of making newspaper hats makes it clear there is value in the older gentleman’s current life. Georgie never does hear her grandfather call her by name, but the more they interact together the less important the actual name recognition seems to mean to Georgie. Grandpa remembers her, if not by name, by an activity he can recall.

Newspaper Hats reflects the difficulties inherent with dementia. Newspaper Hats also shows how important interacting with afflicted family members is for everyone, including a young granddaughter.