#1005 – The Hockey Song by Stompin’ Tom Connors and Gary Clement

.
“’Hello out there, we’re on the air, it’s hockey night tonight!’ So begins The Hockey Song. Stompin’ Tom Connors’ unforgettable ode to the greatest game on ice. Played before, after, and during hockey games across North America, it evokes the pure joy the good ol’ hockey game brings to players and fans alike.

“In the illustrated version of Stompin Tom’s song, artist Gary Clement brings us all into the picture. The book begins with a father carefully lacing up his son’s skates before a pick-up game on a wintry city rink. Once on the ice, they’re joined by skater after skater, with every age, colour, gender, and team alliance grabbing a stick—passing, shooting, scoring, and having the time of their lives. When the game ends, as everyone knows, ‘the home team wins!’ and father and son head home, triumphant.

“A fresh take on a classic song, The Hockey Song is a tribute to hockey, winter, and having fun with the best game you can name.” [INSIDE JACKET]

Review
A father and son face off at center rink. As his son, wearing number 4, snags the puck, the father sings out to the empty rink, “Hello out there!” His young son adds, “We’re on the air.” Outside the rink, making his way toward the ice, a second boy completes number 4’s sentence, “It’s hockey night tonight.”

Singing, speaking, shouting, or simply stating The Hockey Song new players join the game. At the verse, everyone sings as one,

“SECOND PERIOD!” sings out number 4, now alone on the ice, under a bright spotlight. The pick-up game and The Hockey Song continue. Clement’s ice blue shaded illustrations capture the diverse group of players as they skate and sing. A sense of movement can be felt as the skaters, most wearing a sports sweater with the logo of their favorite team, move toward and then away from the reader and each other, chasing the little black puck.

Divided into two teams—two huge teams—the gleeful players skate and sing their rendition of the iconic hockey song to the very last word. The everyone piles up for a requisite winner’s photograph, leaving room for the invisible Stanley Cup they’ve each just won. Number 4 and 27 are happy, exhausted, and triumphant. They are also once more alone, walking away from the rink, boots on, hockey stick slung over a shoulder.

Hockey fans, young and old, will love this illustrated version of the iconic Hockey Song, played at every major hockey game. Readers familiar with the game’s atmosphere will feel the excitement of the puck flying from end to end. Those, like myself, who have never heard the song, will feel the excitement in the enthusiasm of the gathered players. I really love this picture book. I love how it all starts with a father and son and then one-by-one others join in until there is a hodgepodge of people all enjoying the game and the song. 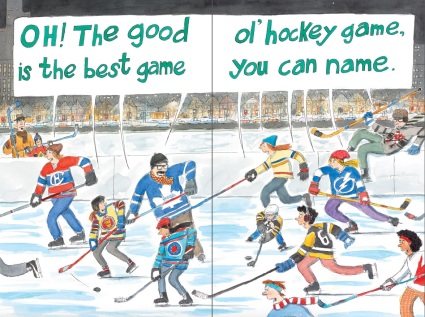 Though an unusual picture book, The Hockey Song is difficult to resist. It reminds me of my own childhood hockey games on neighborhood ice rinks. The love of a common sport brings together a diverse community, who then play and sign their hearts out without one fisticuff—probably a first for a hockey game. Fans young and old will adore The Hockey Song.

Add The Hockey Song to Your Goodreads Shelf HERE.
Teachers’ Guide is HERE.