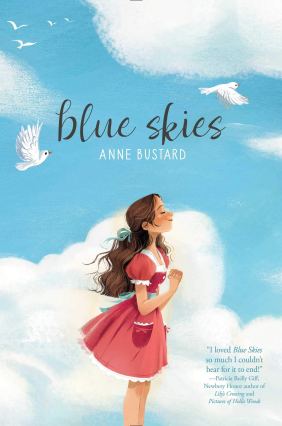 GLORY BEA BENNETT knows that miracles happen in Gladiola, Texas, population 3,421. After all, her grandmother—the best matchmaker in the whole county—is responsible for thirty-nine of them.

Now Glory Bea needs a miracle of her own.

The war ended three years ago, but Glory Bea’s father never returned home from the front of France. Glory Bea understands what Mama and Grams and Grandpa say—that Daddy died a hero on Omaha Beach—yet deep down in her heart, she believes that Daddy is still out there.

But miracles, like people, are always changing, until at last they find their way home. (from jacket flap)

“MIRACLES HAPPEN in Gladiola, Texas, population 3,421. And since Grams is responsible for thirty-nine so far, I’m counting on her gift to run in the family. After all, she always says, ‘Have audacious expectations.’”

Glory Bea is the only child in Gladiola, or nearby Tula, whose father didn’t return home after World War II. He died a hero on Omaha Beach in France, and though Mama and the grandparents have told her this, Glory Bea refuses to believe. She is sure her daddy will return soon, but when she hears the Merci Train will make a stop in Gladiola, she is positive her daddy will arrive home on that train. Glory Bea begins making plans for his return and counting the days. She has only one problem . . . Randall Horton.

Randal Horton served in the war alongside Glory Bea’s father. On his way to Florida and his sister’s home, Randall Horton stops in Gladiola to visit the Bennett family, as he promised he would. The problem, as far as Glory Bea believes, Randall Horton is not leaving Gladiola fast enough. Then he decides to stay. But the biggest affront, he begins dating Glory Bea’s Mama!

If her Daddy is to return home, Randall Horton must go.

Glory Bea’s heartache is poignant and heartrending. With Randall Horton she gravitates between obnoxious to sarcastic, despite the adults in her life telling her to give the man a chance. Glory Bea is a typical ten-year-old with her friends, in her thinking, and when threatened that her father will be lost for good.

While Glory Bea awaits her miracle, she tries to emulate her Grams, the local matchmaker. Her best friend, Ruby Jane, has a crush on Ben, Glory Bea’s neighbor. Ruby Jane wants Glory Bea’s help in getting Ben to invite Ruby Jane to the school Valentine’s Day Dance, now that Ben is no longer dating Delilah. All sorts of mishaps occur offering a nice levity between the heartache Glory Bea feels whenever doubts creep in or the truth won’t go away.

Middle grade kids will enjoy Blue Skies. Some will relate to Glory Bea, fatherless and living in a three-generational home. Others can relate to her needing to accept a new man in her mother’s life and soon her stepfather. The story is an easy read with mostly happy family-oriented scenes. Kids may find a few things unthinkable: Nightly family dinners, calling the local switchboard operator to make a call (who might listen), and the local soda shop, where Ben runs the counter, is a hangout. Middle Graders, if forgetting the year is 1949, will be shocked at how backwards a small town can be, but they will also notice the closeness of the residents as they look out for one another.

Blue Skies is highly recommended, including adults who like middle grade books and those who have never read one. There is so much to love about Blue Skies.

In her author’s note, Anne Bustard explains how the Friendship Train began and eventually led to the Merci Train. Her research is amazing. Having never heard of this, I found the author’s note very enlightening. The research is based mainly on the Texas boxcar. For information on the other 48 boxcars, the bibliography lists the website for the Merci Train.  (http://mercitrain.org/)

*The Merci Train or The Thank You Train or The Gratitude Train, was a train with 49 boxcars, one for each state. France sent these as a thank you for the war effort on their behalf and for The Friendship Train,  Americans sent  full of food and other items for Italy and France to help them through the years of rebuilding. France sent the Merci Train in response, which was full of all sorts of things from individuals in France. Each boxcar also contained a handmade wedding dress from seamstresses in Leon.

Be Advised: Kid Lit Reviews has a new domain name, which will be the only domain by 2021. Please change your settings for reaching KLR. Thanks!