#1275 – THE BOOGEYMAN: A Monstrous Fairytale by Shane Berryhill 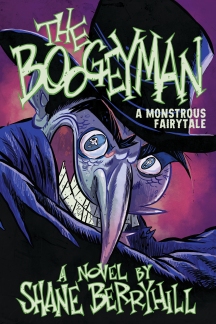 Synopsis
Everything you think you know about the Boogeyman is wrong! This is what a thirteen-year-old boy nicknamed “Puck” learns when he follows the Boogeyman through his closet into the realm of Fairy. Puck discovers the Boogeyman is not an evil “Boogey” at all, but rather a “boogey hunter” whose duty it is to track and bring home monstrous fairies who have strayed into the Mortal World.

As yet unaware of the Boogeyman’s true nature, Puck mistakenly frees a shape-shifting changeling from the Boogeyman’s lair. Their quest to re-capture the rogue fairy leads Puck and the Boogeyman on a world-hopping chase that ultimately sees both Fairy and the Mortal World embroiled in an all-out war—one that only Puck, the Boogeyman, and their allies can hope to stop. <small>(from publisher)</small>

Opening Sentences
“I guess this is the part where I should tell you my nane. But like my dad often says when  he’s in a hurry, there’ll be time enough for pleasantries  later.”

Why I like The Boogeyman: A Monstrous Fairytale
An unnamed thirteen-year-old boy is the narrator of this unusual Boogeyman tale; plus other monsters of the day and night. The boy watches as the Boogeyman exits his closet and understands this is a portal to another world. Children have been going missing and everyone is on edge. The young boy, after a scene involving the boy’s father checking out the portal (which made the boy seem closer to age six than thirteen), the boy finds the nerve to enter the portal and chase down the Boogeyman. He is sure the bag Boogey carries contains another child he kidnapped.

As will happen a lot in this not-what-you-think tale, Puck (named by Boogeyman and his cat), mistakenly releases the monster who’s been kidnapping kids, not the kids themselves. Boogeyman is working nights, capturing those creatures responsible for kidnapping human children. Once the sun rises, he must call it a night and return to his castle home. Ready to great Boogeyman is his cat-butler. The cat’s main task is not letting anyone enter the castle proper, yet Puck once stood there watching the two foot-racing up and down the spiral staircase.

Throughout the story, we meet the King and Queen of Twilight Castle, various creatures of both the night and day, and learn there is a negotiated pact between the creatures and humans, which is being flagrantly violated with the kidnapping of human children. The King and Queen have called upon the Boogeyman to eradicate the night world of those creatures. Having let one of them go free, Puck must join the Boogeyman in his nightlong searches or face the royal couple’s wrath. With Puck’s help, Boogey believes he has a great idea that will draw the kidnapping creatures right into their hands. Will it work out or will war erupt between the Mortal Lands and the Fairy Lands?

The story is inventive and quite fun to read. The world-building is creative and involves three worlds:  the night, the light of day, and Puck’s world. Each are good and offer up surprises readers will love. The main characters, Puck and Boogey, are both interesting but the Boogeyman is more consistent in character, has the best lines, and can easily freak you out.  Puck has an active imagination enhanced by the monster stories he and his Dad love to read and watch. He fits in well as Boogey’s sidekick—just don’t call Puck his sidekick within earshot of the Boogeyman.

Overall, The Boogeyman, A Monstrous Tale will delight young readers who like monster stories with all the flashes but little gore. Everything you thought you knew about monsters and trolls, fairies and gnomes, orcs and children named Puck, needs rethought.  Kids are advised to begin The Boogeyman on a weekend, as you will not want to let the book go until the very end. Parents can rest assured there is nothing frightening, at least not the nightmare inducing kind, and contains much child-appropriate humor.

In this age of publishing, anyone can write a story, have it edited, re-write it, publish, and later update:  all in warp-speed . Mr. Berryhill took his time to get it right. Middle grade readers will love The Boogeyman, A Monstrous Tale and anxiously wait for author Shane Berryhill to write another character-driven story.  This includes girls as well as boys. I was hooked from the first page and am anxious to read Book 2.

The last few months of 2019, and now 2020, has given kids of all ages new, imaginative authors who know how to spin a tale on paper. Shane Berryhill is one of those authors who looks to have a promising new career. Will there be a sequel?  I believe so. The final page does not salute you with “THE END.” Instead, we get an open-ended  “TO BE CONTINUED. . .”

What Went Wrong? Since you asked, I will tell give. Before the title page (thanks for the signed book, Shane), the dedication, a quote from Ray Bradbury, and even chapter 1,  is a prequel, of sorts. A single paragraph places the Boogeyman in Puck’s closet for the first time causing, “icy spiders of panic skitter up my spine as I watched the clothes hanging in my closet draw away like stage curtains . . .”

I am not found of prequels and did not like this one. It felt like I was watching the beginning of a show that must set itself up before starting each new episode (as  if the audience lacks the ability to remember a great story). Trust your audience.

Be Advised: Kid Lit Reviews has a new domain name, which will be the only domain by 2021. Please change your settings for reaching KLR. Thanks!

NEXT UP: PB – David’s ADHD by Sherrill S. Cannon